Shelter for Victims of Human Trafficking

In 1998 our congregation, the Sisters of Mercy, saw the need to offer special assistance to victims of domestic violence in South Africa, and so in 2000 we opened a shelter for these traumatized women.

This transitional home is a place of safety for women in distress. Here they receive basic comforts and professional care according to their needs. We offer individual counselling as well as skills training so that the women can regain their self-worth and become financially independent.

in 2004, IOM (International Organisation for Migration) identified our shelter as one that could offer a place of safety to victims of human trafficking. We gladly entered into an agreement with IOM, so that women could be sheltered in our home while awaiting repatriation or reintegration under the Assisted Voluntary Return Programme. In 2011, IOM was unable to renews the contract as their funding had ended. In 2010, Mercy House was identified as one of 13 shelters in South Africa that would shelter victims of human trafficking during the Soccer World Cup and into the uture.

To date we have accommodated over 200 victims of trafficking. The majority of these have been women from Thailand, but there have also been a few women from other African states – Mozambique, Nigeria, Rwanda and the Cameroons, and some South Africans. Usually we accommodate the beneficiaries for 2 to 3 weeks while their travel documents and tickets are processed by the Embassies. A few (those whose cases have gone to court) have remained with us for longer periods. Each woman has her own needs and we treat each accordingly.

In our shelter, we have set aside one of the rooms for victims of trafficking- a comfortable, quiet, private place where the healing process can begin. 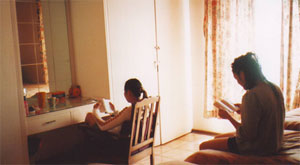 Often the women are traumatized when they arrive and all they want to do is sleep for the first day or two. This room is a refuge within a refuge – a place to rest, read, write and chat to others in their own language.

When they arrive at the shelter their immediate needs are assessed and met wherever possible. They are provided with toiletries and clothes. Many of the women come only with the clothes they are wearing – and if they have been rescued in a police raid, this could mean that they only have a T-shirt over their underwear.

If they give their consent, they are seen by a doctor as soon as possible. Many have contracted STDs and some are afraid of having contracted HIV. Other are afraid that they are pregnant.

Culturally, food is very important: it is a link with home and the familiar. We even talk about comfort food - food that makes us feel “at home”. We encourage the women to do their own cooking and preparation of food because this is therapeutic. We buy the ingredients that are needed for cultural dishes and this enables the women to enjoy “home cooking” – something comforting and enjoyable. 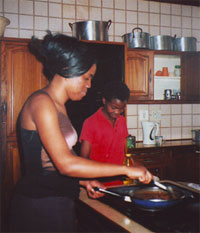 The women may also receive individual counselling offered by our social worker, especially those who stay with us for a longer time. Language can be a challenge, but the social worker and the house mothers have learnt a few essential words and sentences in Thai, French and Portuguese. The embassies have provided us with lists of questions and answers with the English translation. These lists have proved to be a great help in communication.

To help them feel more at home, we have books, magazines and DVDs in different languages.
We also encourage the women to take part in the activities in the skills department or the garden, where they can share their talents or learn new skills. It is a joy to watch the skills being taught in sign language and smiles. 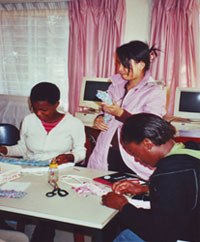 On the property, we have a prayer room which is used for prayer meetings and bible sharing, but many of the women use it for their own private meditation – and they are encouraged to do so. Victims of trafficking often cling to their faith when all else fails them. We do not promote any specific religion, but allow each woman to find her way in her own faith. Most of the victims of trafficking who have stayed with us have been Buddhist. They have found a special tree under which they meditate.

Victims of internal trafficking - South Africans - need a place of safety while they are reintegrated into society and reunited with their families. Some need to learn skills that will empower them, help them find employment and make them economically independent and so protect them from being trafficked again. These are the services that our shelter, in partnership with the Department of Home Affairs, the Department of Labour and the Department of Social Development, try to provide. 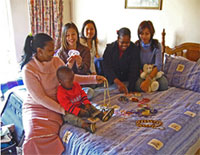 South Africa has been identified as a major human-trafficking destination for victims from within the country, the region and beyond, yet there is no legislation that specifically criminalises human trafficking and protects victims. The country is a signatory to the 2000 UN protocol to prevent, suppress and punish trafficking in persons. In signing this document, also known as the Palermo Protocol, the government committed to adopting legislation to make human trafficking a criminal offence and began the process of drafting a law in 2003. However the Prevention and Combating in Trafficking in Persons (TIP) Bill in South Africa only reached parliament in March 2010 and there is no indication of when it will be passed.