Sisters of Mercy & VITA – A Partnership for the Planet

Life for women and families in Africa can be tough – usually through no fault of their own – as they battle against poverty, climate change and a life of drudgery and weighty responsibilities. 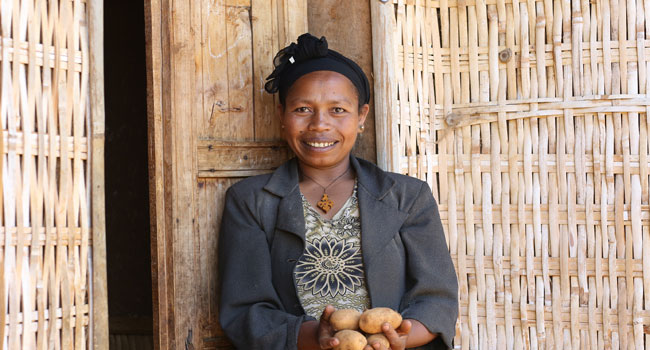 Tozene Nada outside her home with a sample of her potato crop.

For many women and their families, life could indeed have been very different had it not been for the partnership between Vita and the Sisters of Mercy Western Province (The Congregation). Working together, they are delivering sustainable livelihoods to thousands of farm families through a combination of projects that secure access to latrines; access to clean water through the provision of wells; access to renewable household energy through the introduction of fuel efficient cookstoves and solar lighting; and access to food through seed potato, dairy and irrigation programmes. These integrated programmes are the only way for these families to be free of aid dependency.

Tozene Nada is one of the women who is participating in the potato programme. She is an inspiring woman. Born in the mountains of the Great Rift Valley in southern Ethiopia, she showed a certain tenacity when she took over the running of the two – hectare family farm after her father in law died. Although both high altitude and hilly, Tozene’s homeland is extremely abundant. However, this visually stunning scenery is also greatly overworked due to the strains of having to support so many people. Amongst other things, new and innovative land management practices are necessary for the continued survival of Tozene Nada and other rural farm families. 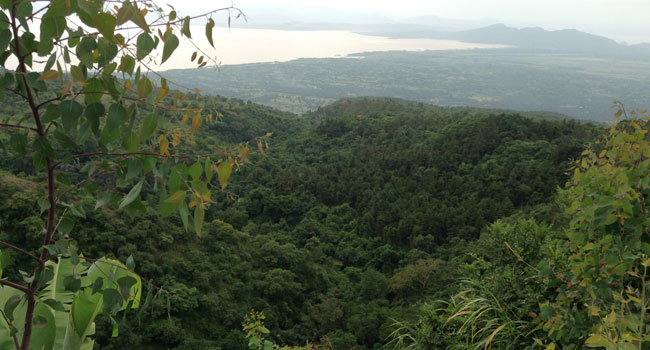 View of God’s Bridge, a narrow land mass that connects two large lakes which can be viewed from the market town of Chencha, near the village of Doko Yoyery where Tozene has her farm

It must have been difficult for Tozene, as her husband was away working as a weaver in Addis Ababa. This is not uncommon in Africa, where oftentimes men are forced to migrate to urban areas to supplement the income of very small farms. Unfortunately this puts huge burdens of responsibility on the women who are left behind as they are expected to manage the farm, run the household, care for the extended family and rear the children alone. In Tozene’s case, it has been 15 years since she became the head of her household and at age 38, she now has three children - one boy and two girls. Doko Yoyery, the mountain village where Tozene lives, is in a remote and at times quite inaccessible part of the Gama Gofa Zone, about a two hour bumpy jeep ride from the small city of Arba Minch. With the large commercial agricultural traders of Addis Ababa an unfathomable eight or nine hours’ drive away, the main market for Tozene’s potatoes, which are a staple food in Ethiopia, was the smaller local market in nearby Chencha. 'All the local farmers were harvesting potatoes at the same time as me,' says Tozene, 'and this meant that prices were at their lowest when I brought my produce to market. I needed to find a way to grow more potatos and store them for longer, until prices rose again.'

Four years ago she got involved with the Vita potato programme, which seeks to improve the seed stock, agronomy and marketing skills of small farmers in East Africa. This programme is a collaboration between Vita, the Sisters of Mercy and a range of international and national expert agricultural partners. It is very indicative of any SoM / Vita collaborations, which are practically applied on the ground but always make sense from a climate change aspect.
This very successful partnership has long recognised the strong links between climate change and hunger and the need to have an integrated approach to sustainable livelihood programmes.

Tozene’s inclusion changed everything for her. She and her fellow farmers have formed a co-op which gives them access to quality, high-yielding seed potatoes as well as vastly improved negotiating power when buying seed, fertilizers and pesticides. As a bulk producer, the co-op now has access to larger markets in Addis Ababa, and Vita’s agronomists have helped them improve the quality of their potatoes to meet the standards required for these new markets. They have also built a community potato store for supplying the markets, and many farmers like Tozene now have personal small stores on their farms. This means that she can supply quality potatoes to the co-op to sell on her behalf, keep seed potatoes back to plant the following season, and store some potatoes for her own stove over the following months.

The potato itself is one of the world’s most important foods. It has all the nutrients that a body needs to survive and thrive, and it needs very little water to grow. It is extremely adaptable and can be grown in high altitudes or at sea level. There are over 3,000 species of potato growing somewhere on the planet today, and the key to success is breeding the right potato to give the best yields in the area where they are needed.

The project works on a seed loan basis, with some profits invested back into the co-op. Tozene turned the initial loan of 500kg of seed potatoes into six tonnes of potatoes, whereas previously, she might have expected a yield of about three tonnes. She then paid back the initial seed potato loan and the following year Tozene planted double the amount of seed potatoes. This process has not been without its learning curves. Last year, yields took a dip when Tozene discovered that she had bacterial wilt on her land. However, with help from her co-op, alongside advice and support from Vita agronomists, Tozene was able to rotate her crops while resting part of her land before planting potatoes again with new uncontaminated seeds. It is vital that farmers have the expertise, knowledge and training to help them withstand unexpected stresses like bacterial wilt. 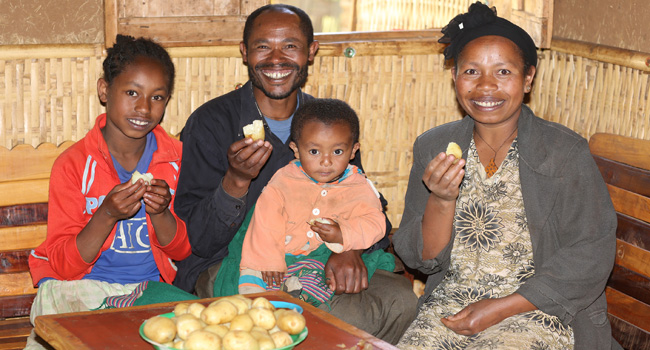 Tozene Nada, Tesfe and children enjoying the fruits of her labour

Tozene has welcomed the training and support that she got from Vita, both on the best ways to grow potatoes but also on how to store them and sell them. It has transformed her family's lives, allowing them to buy a cow, three oxen and even a television for her delighted children. Eventually her husband gave up the weaving and came back to join her on the farm, looking after the oxen and the cow. The wonderful thing about this partnership between Vita and the Sisters of Mercy Western Province is that it is a successful template of agricultural development that can be shared with other development organisations and implemented in other communities worldwide.

Tozene is adamant that the programme has changed her life for the better. 'It has helped me to reunite my family and send my children to school,' she says. And what about Tozene’s kids? 'They are happy,”'laughs Tozene, 'because I have just invested in a television!'