Sisters of Mercy in Auburn, California Celebrate Arrival in Sacramento, 1857

In 2007, the Sisters of Mercy, Auburn Regional Community, celebrate 150 years of caring for those in need in the northern California community. A remarkable group of eight women led by Sister Mary Baptist Russell had traveled half way around the world from Ireland in 1854 to an unknown frontier called San Francisco – to care for the sick, the poor and the uneducated. Three years later, Sister Mary Baptist accompanied the five Sisters who were to remain in the gold rush town of Sacramento.

Just before dawn on the morning of October 2, 1857, a river steamer slipped into Sacramento’s dock bringing with it merchants, miners and the Sisters of Mercy. At the request of Bishop Joseph Alemany, the Sisters came to establish a school in the basement of St. Rose Church, to care for its orphans and to do whatever was needed to assist its poor and needy.

Inspired by the vision of their foundress Catherine McAuley, the Sisters dedicated themselves to the service of those who were poor, sick, uneducated and in need. They didn’t just have a plan. They had a mission.

In spite of both physical and financial hardships, the Sisters opened St. Joseph’s Academy; established the Catholic Orphanage of Sacramento; and provided a safety net of social services for those in greatest need. St. Joseph’s Academy offered women a challenging academic program, commercial training, boarding school accommodations for daughters of rural families and a belief in the value and importance of women’s contributions to society.

Over the next 150 years, the Sisters expanded their ministry to include over 14 elementary schools and four high schools.

Today, Mercy education flourishes in a variety of modes including Mercy Education Resource Center and Cristo Rey High School. Although they came as teachers, the Sisters became the city’s first visiting nurses, caring for Sacramentans who endured devastating floods in 1862 as well as waves of malaria, typhoid fever and tuberculosis.

Members of the medical community prevailed upon them to open a hospital to respond to the health care needs of the city. In 1896 Mater Misericordiae Hospital, known as the Sister’s Hospital, opened at 23rd and R Streets. Shortly thereafter, the Sisters added a nursing school, training others who could join in their work.

For 150 years the Sisters have continued their service to Northern California, changing with the changing needs. Its past is a promise that Mercy is the same…yesterday, today and tomorrow.

Historical Reenactment of Sisters’ Arrival in 1857
As the keynote in the annual Gold Rush Days at the Old Sacramento Waterfront Park, Sisters in full habit will reenact arriving by steamboat and being greeted by the pastor of St. Rose Church where they would start the first Catholic school in the area

Historical Vignettes relating episodes in the early days will be presented in the Old Sacramento Schoolhouse and Eagle Theatre throughout the four days, performed in historical dress for school children, media, and general public

Sisters of Mercy and Mercy Associates, Auburn, joined by the Sisters and Associates of the Burlingame Region, will welcome 1200 guests at Cathedral of the Blessed Sacrament, Sacramento. Bishop William Weigand, Ordinary of the Diocese of Sacramento, will preside; Father Paul Crowley, S.J., former Mercy student, will be the homilist.

Dedication of Sculpture in State Capitol Park following the Mass

8 ft high five piece sculpture by Ruth Coelho depicts Sister Mary Baptist Russell, foundress of Sisters of Mercy in California, with the Sisters’ works of mercy represented by a sick child and mother, a nurse, and an orphan.

The gala is planned to be a celebration, in elegant style, of the Sisters’ 150 years of service in Sacramento. Full orchestra with historical dialogue, dinner.

Additional information is available at the following links: 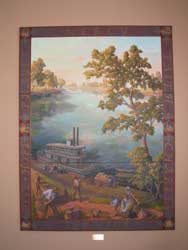 The painting was done by Diane Lumiere, of Lumiere Designs for the 150th Anniversary of the Sisters of Mercy, Auburn. The copyright permission has been obtained from the owners, Catholic Healthcare West, Sacramento Regional Office, where the painting is installed.