Sisters of Mercy from around the world attend UN Conference

Ten Sisters of Mercy representing Mercy International Association were in attendance at the 57th Annual United Nations Department of Public Information/Non-Governmental Organization Conference held at UN headquarters in New York City, 8-10 September 2004. Entitled , “Millennium Development Goals: Civil Society Takes Action,” the conference focused on the roles of NGO’s, civil society and governments in the implementation of the eight Millennium Development Goals (MDGs) which were adopted by 189 UN Member States at their high-level millennium session in 2000.

Centered on the most critical problems causing tensions in the world today, the MDGs are designed to give people worldwide the tools to care for themselves in healthy, sustainable environments. 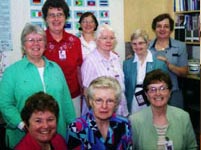 (MIJN NA), Institute of the Sisters of Mercy of the Americas.