On July 16, 1858, Frances Warde and four companions arrived in Manchester, New Hampshire from Providence, Rhode Island, at the invitation of Reverend William McDonald, the pioneer priest whose parish encompassed the whole state. They began immediately to instruct young children, mill workers and women in the city. They became a familiar sight in the streets as they went out to visit poor and sick persons. In the fall of 1858, Frances opened Mount St. Mary Academy in the north wing of the convent on Union Street. The academy, now on Elm Street in Manchester, is also celebrating 150 years of service.

The sisters in New Hampshire are observing the anniversary with a number of special activities. They participated in Manchester’s annual St. Patrick’s Day parade, which was dedicated to them, and on July 12 they held a prayer service at the grave of Frances Warde, who is buried in St. Joseph’s Cemetery in the city. Sixty-five sisters, associates and friends gathered to remember Frances and the early sisters who are buried there. The sisters of the foundations Frances made from Manchester – Philadelphia/Merion, New Jersey, Omaha, Portland, and Vermont – were remembered in a special way during the ritual.

On August 9, sisters, associates and companions from throughout the Northeast Community have been invited to Windham for a cookout and open house at the combined Northeast Archives and Heritage Room which has been established in the Windham building. 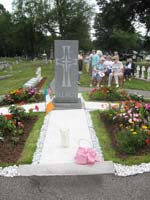 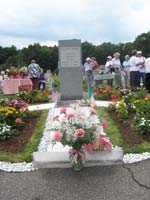