Sisters of Mercy of Newfoundland Celebrate

“My soul proclaims the greatness of the Lord, my spirit rejoices in God my Savior”, “Glory to God in the highest”, “Praise the Lord with the Sound of Trumpet” were the proclamations of the whole assembly as it gathered in praise and thanksgiving in the Basilica of St. John the Baptist on December 12, 2006 to celebrate the 175th anniversary of the founding of the Congregation of the Sisters of Mercy. It was indeed fitting that the Eucharistic Liturgy be held in the Basilica, the place of worship built by Bishop Michael Fleming. Bishop Fleming had visited Catherine McAuley a number of times and eventually invited her to establish a foundation in Newfoundland. Sister Helen Harding, Congregational Leader, warmly greeted and welcomed over three hundred associates, collaborators in ministry, family members and friends who joined us in celebration, noting that the Newfoundland foundation in St. John’s in 1842 was the first Mercy foundation outside the British Isles and the first in North America. 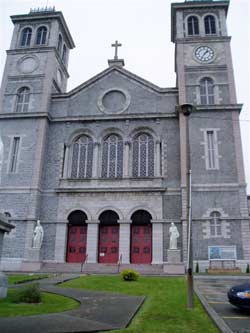 The Liturgy, celebrated in honour of Our Lady of Guadalupe, with Archbishop Brendan O’Brien as presider, was one of thanksgiving and celebration. The Glory to God in F Major, a composition of Sister Kathrine Bellamy, one of the Sisters in our Congregation, set a theme of praise and joy. We were pleased that the Presentation Sisters and Christian Brothers, whose foundress and founder, Nano Nagle and Edmund Rice, contemporaries of Catherine McAuley, could participate in the Liturgy of the Word. In his homily, Archbishop O’Brien noted that Catherine McAuley “demonstrated in her life a great trust in God’s Providence; she exhibited a deep reliance on God which could only have emerged from an extraordinary relationship which was nurtured over the years.” Following Holy Communion, the sisters led the Assembly in singing the beautiful Suscipe of Catherine McAuley as a reflection. After the celebration of the Liturgy, all were invited to join the sisters in a reception in St. Bonaventure’s College. 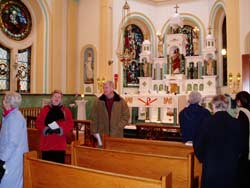 We were pleased to share our founding story and our celebration with others in a number of ways. During the week of December 12, the Congregation sponsored an ‘Open Door’, visits to two of its heritage sites, the chapel of Convent of Our Lady of Mercy, and the Heritage Centre at O’Connor Building. A narration of an abridged version of the life story of Catherine McAuley, based on Anne Reid’s composition, Daring to be Different, was broadcast on one of the local radio stations. Earlier, the Sisters of Mercy of Newfoundland sponsored a nationally televised Mass from St. Michael’s Cathedral in Toronto on November 11, the anniversary of the death of Catherine McAuley. 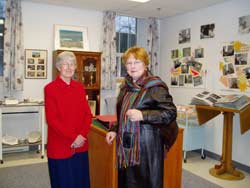