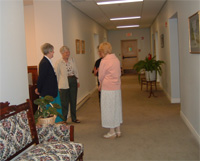 On June 17, 2005, the Sisters of Mercy, Newfoundland and Labrador, received the Southcott Award from the Newfoundland Historic Trust for built heritage preservation in the province. Established in 1984, the Southcott Awards program was developed to commend the good work of individuals, families, organizations, corporations or govenments in the preservation of the province's architectural heritage. Awards are normally given for architectural projects completed within the past three years for buildings which are fifty years or older.

The Congregation is receiving the Award for O'Connor 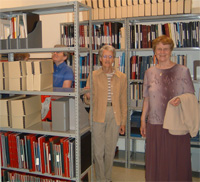 Building, renovations to which were completed in 2004. Sister Brenda Phelan, chairperson of the Littledale Property Committee, accepted the Award on behalf of the Congregation. During the presentation, it was noted that O'Connor Building is now a striking piece of architecture set within the beautiful Waterford Valley and is surrounded by maple, lilac, birch and fir trees. Renovations involved an East Building occupied in 1902; a West Building occupied in 1912 and a Centre Building connecting both the East and West buildings and which was occupied in 1919.

We are very pleased to have received the Award, not only because of our interest in heritage conservation but even more so because these buildings hold for so many of us the story of the lives of the individual sisters who lived at Littledale many decades ago in ministry to student teachers. Many others have spent their beginning years in religious life at O'Connor learning and living the ways of Mercy.

The plaque of commendations is now mounted on a piece of original fir taken from a baseboard of the building during the renovations and is now displayed in the foyer of O'Connor Building.