'Slaves No More, But Brothers and Sisters': MIA Welcomes Message for World Day of Peace, 1 January 2015

The theme and title for the 48th World Day of Peace message is 'Slaves No More, But Brothers and Sisters'. 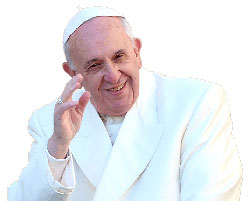 In his 2015 Message for the World Day of Peace (January 1), Pope Francis reflects on human dignity and true fraternity amongst all peoples, urging us to recognize the 'equal dignity' of our brothers and sisters who are enslaved and exploited and to work to end human trafficking, trade in migrants and prostitutes, slave labor, and the enslavement of women and children.

Eradicating human trafficking is a priority issue for Mercy International Association at both grassroots and advocacy levels. In the 40+ countries where Sisters of Mercy and our Partners in Ministry serve, we support trafficked persons, provide programmes to educate about exploitative practices and lobby for change.

In his Message Pope Francis denounced the 'general indifference'  that allows human trafficking and enslavement to flourish, emphasising our individual social responsibility towards our neighbour ‘to acknowledge his or her intrinsic dignity in truth and freedom’.

In calling on each of us to ‘practice acts of fraternity towards those kept in a state of enslavement’, the Pope urges us to ‘practice small, everyday gestures – which have so much merit! – such as offering a kind word, a greeting or a smile. These cost us nothing but they can offer hope, open doors, and change the life of another person who lives clandestinely; they can also change our own lives with respect to this reality.’

In these words Pope Francis echoes the words of Catherine: 'There are three things the poor prize more highly than gold, tho’ they cost the donor nothing; among these are the kind word, the gentle, compassionate look and the patient hearing of their sorrows'. (Familiar Instructions, p.138).

Read the Message for the World Day of Peace

Sisters of Mercy and our Partners- in- ministry are actively involved in the following organisations opposing trafficking in persons:

Religious in Europe Networking Against Trafficking and Exploitation (RENATE) - Europe