Luarena McCormick rsm & Roisín O’Brien from ‘Be the Change’ presented an abridged version of a half-day workshop to the gathered audience .

Wednesday’s talk began with the lighting of a candle and a moment of reflection on the circle of life – the past, the present and the future.

Sr Luarena & Roisín spoke to the group and presented a number of short films to guide participants through a series of questions to a new understanding of how we as individuals can make a difference in the world we live in. 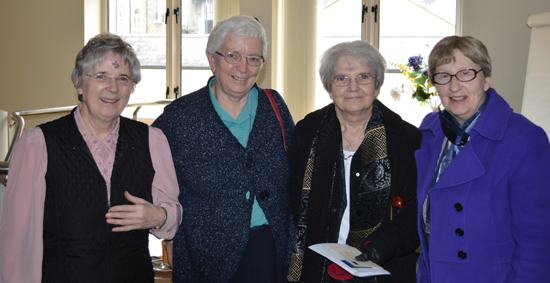 The ‘Be the Change’ programme was named after Ghandi’s quote – ‘Be the change you want to see in the world’. The purpose of the ‘Be the Change’ symposium is to bring forth an environmentally sustainable, spiritually fulfilling, socially just human presence on this planet – all of which are inter-related concepts. To do this the audience were invited to examine four questions:

The first short film that Roisín and Luarena presented explained that in order to answer where we are with regards the environment, we must discover what are the current states of our relationships with the planet, other species and with ourselves The concept of sustainability – “the ability of the current generation to meet its needs without compromising the ability of future generations to meet theirs” – was raised in the film. The participants were informed of a UN report that shows that the earth is under very severe distress and that our human activity is putting such a strain on the natural functions of earth that the ability of planet’s eco system to sustain future generations cannot be taken for granted.

The participants were then invited to examine the issue of Environmental Justice - the belief that no community should have to bear the brunt of a disproportionate amount of environmental burdens and not enjoy any environmental benefits. Another short film was screened which explained that, at present, race and class are the best indicators of those who experience good social justice with access to facilities such as clean air and water and those who experience pollution and earth degradation.

The theory of Vietnamese Zen Buddhist Monk, Thich Nhat Hanh was introduced. Thich Nhat Hanh developed the concept of ‘inter-be’ - the idea that you need other people and beings to ‘be’.  This might include elements such as our families and society in general, as well as the sunshine, rivers, air, trees, birds, elephants and so forth.

How did we get here and where do we go from here?

The participants were then introduced to the questions – ‘How did we get here and where do we go from here?’ and the fact that the current state of the world is the result of human decisions. The theory of Cultural Historian and Ecotheologian, Thomas Berry was introduced. Berry proposed that humans must change their outlook, and by doing so have the capacity to change the outcome. Humans must ask what ‘resources’ are and acknowledge that such ‘resources’ have the right to be on this planet on their own merit, and not just to satisfy human needs.

The audience was also shown a short film about Julia Butterfly Hill, an American environmental activist, who lived on a platform in a Redwood tree, 200 ft from the ground to protest the destruction of an old growth forest. Hill claimed that everything we do in life is a social justice issue, posing the question ‘when we throw something away, where is away?’

What is possible for the future?

After considering where we are and how we got here, the view of ‘the new story’ was presented. ‘Be the Change’ expresses the view that our current path is unsustainable, and asks what is possible for the future? According to the workshop, the solution is that to change the world we must start with ourselves. According to 'Be the Change' this involves making a personal stand – “standing for what you believe in.”

As the presentation drew to a close Roisín and Luarena distributed 'Declaration Cards' which the audience were invited to sign. The cards included a commitment to ‘Be the Change’ and included the quote ‘Splendid Torch’ by George Bernard Shaw, which sums up the idea of a personal stand:

'This is the true joy in life, the being used for a purpose recognized by yourself as a mighty one; the being a force of nature instead of a feverish, selfish little clod of ailments and grievances complaining that the world will not devote itself to making you happy.

I am of the opinion that my life belongs to the whole community, and as long as I live it is my privilege to do for it whatever I can.

I want to be thoroughly used up when I die, for the harder I work the more I live. I rejoice in life for its own sake. Life is no “brief candle” for me. It is a sort of splendid torch which I have got hold of for the moment, and I want to make it burn as brightly as possible before handing it on to future generations.'

The final message from the programme came from Archbishop Desmond Tutu who said that “one of us can do something to make a difference.”

Roisín and Luarena then extinguished the candle, symbolising that the light must now be brought to all those we meet as we go from this place.