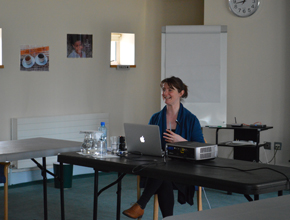 Nessa Ní Chasaide has been involved in the global justice sector for over 15 years, and since 2006 she has been the Co-ordinator of Debt and Development Coalition Ireland (DDCI), a coalition of organisations and individuals who share a deep concern about debt injustice and the injustice of the global financial system and who campaign for an end to the financial exploitation of countries, in the Global South and now in Europe too.

Nessa was welcomed to the Catherine McAuley Centre on Herbert Street, Dublin 2 by Maureen O’Connell from The Future We Need Inter-Congregational Group, and the session began with a prayer -

Nessa began her presentation by asking the audience to consider the statement, “Governments and people should always pay their debts”. By reflecting on this statement, and what opposing points of view might be, Nessa told the audience that the debate can be fully examined and issues relating to power relationships between governments and people, between institutions and governments and between citizens within our country and citizens in other countries can be explored.

Explaining the origins of DDCI, Nessa explained the focus of the coalition as a people-centred organisation, concentrating not just on issues of debt in Global South countries, but on the local debt problem in Ireland. A third issue that DDCI have recently started to focus on is tax justice, as tax laws are part of the bigger financial systems picture, which serve the interests of few while hurting the interests of many.

Nessa described the Jubilee 2000 campaign, the international coalition movement in over 40 countries that called for cancellation of third world debt by the year 2000. She explained that although the Jubilee 2000 campaign had been successful in many ways - over $100bn USD cancelled for nearly 40 countries across Africa, Asia and Latin America, there were many demands placed upon qualifying countries by the IMF and the World Bank, including privatisation, liberalisation, and opening of markets to foreign competition, all of which made local industries vulnerable. Nessa also discussed the ‘pr legacy’ of Jubilee 2000 that those working in debt activism have been left with, and the belief of many people that the problem is now resolved.

During her presentation Nessa highlighted the case of debt in three countries – Ireland, Pakistan and Zimbabwe, and the calls of the DDCI in these cases. Nessa spoke too about the case of debt default in Argentina in 2001, and of the ‘vulture funds’ that emerged since – lenders who function to profit out of debt crises by buying debt just before it is cancelled, and then sue creditors for the full amount. 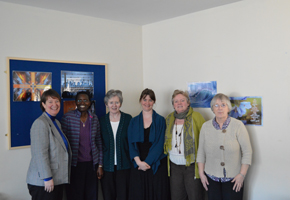 Nessa looked to the future and the solutions to debt crises that the DDCI support, including cancellation of unsustainable, un-payable, illegitimate debt; repudiation; cancellation of debt by the lending governments; negotiated settlement; and default. Nessa also raised the idea of a ‘debtor – creditor conference’, where lenders and borrowers gather together to discuss solutions to debt issues.

Speaking about tax justice, Nessa highlighted the fact that tax avoidance costs Global South countries almost $900bn per year. With their borrowings costing approximately $5trn USD, Nessa and her colleagues at DDCI maintain that a fairer tax system could allow Global South countries to cancel their collective debt within 5 to 7 years.

Nessa concluded her presentation with her views on what gives debt activists hope for the future, including a recent vote by the European Parliament to support the idea of public registers of the owners of companies. The DDCI believe such a register would go to the heart of how money is moved around, is hidden and who benefits, with large multinational companies facing pressure to show how they account for their profits and tax liabilities.