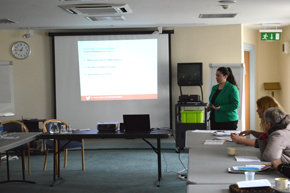 Tanya, who joined the Children’s Rights Alliance (CRA) as Chief Executive in January 2012, has much experience in the area of human rights, having worked with the Irish Council for Civil Liberties (ICCL), the Irish Centre for Migration Studies and the Irish Refugee Council.

She began by explaining the work of the CRA, which unites over 100 organisations in Ireland, and advocates for the necessary changes in Ireland’s laws, policies and services for children. The CRA also holds the Government to account for their obligations to children and young people.

Tanya described the advantages of such organisations working together as one, and gave examples of successes of the CRA, including lobbying for the cessation of detaining older children in adult prisons, and on large policy issues such as the introduction of the Children’s Ombudsman and the Children’s Referendum.

Speaking about the status of children in Ireland, Tanya drew attention to the 17 published official reports that document Ireland’s failure to children. Tanya explained how such failings occurred, and the shortcomings of the Irish political system in failing to make Children and Family Services a political priority.

Focusing on the improvements in child protection that are taking place at present, Tanya gave details of the various strategies that are being implemented. These include the establishment of the Child & Family Agency and ‘Children First - National Guidance for the Protection and Welfare of Children’. Tanya also discussed the Children’s Referendum, which took place in 2012, but has yet to be implemented due to its being challenged in the Supreme Court of Ireland.

Tanya gave details on the CRA ‘Report Card 2014’, the organisation’s annual report which scrutinises the Government on its key commitments to children in the Programme for Government. While the report praises the Irish Government for much of the work they have done in the past year, it also reveals the areas where there is scope for significant improvement.

One key area in which the Government is performing well is ‘Child Protection’, due to the establishment of the Child and Family Agency. This is a particularly important development for those working with trafficked children, as the new agency has a section to deal specifically with separated children. The CRA report card also found that the Government was performing well in the areas of Education, having improved child literacy levels.

However the CRA have concerns in the area of Health. Tanya explained that although the CRA welcomes plans by the Irish Government to introduce free GP care for children aged five and under, they fear for those children who are undocumented and therefore ‘outside the system’, and who many not be able to access this care as a result.

In the case of migrant children, who constitute 10% of the children population in Ireland, Tanya informed the audience that many of the promised reforms to protect migrant children that have not happened. Tanya also highlighted comments made by Geoffrey Shannon, the Special Rapporteur on Child Protection, in his Fifth Report which are of great concern to the CRA. Geoffrey Shannon highlighted the risks facing those 1700 children of asylum seekers, who are living in ‘direct provision’ accommodation. These include more than one family sharing bedrooms; no specific space for children; a lack of vetting of residents who have access to children; and concerns about the children’s developmental needs and nutritional needs. 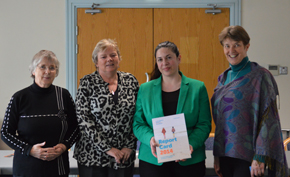 Concluding her presentation, Tanya focused on some of the positive steps that the Irish government is taking to improve the rights of children, including introduction of draft legislation to address the inequalities faced by families, including rights for unmarried fathers and of access for grandparents when families separate. However Tanya warned that there is a collective responsibility on society to champion the most vulnerable children’s rights, particularly in situations where there is little political impetus to do so.

Join Mercy International Association on 2 April 2014 for the fifth Soup & Substance Lenten Talk: Ireland and the Environment – Where Are We Going?’ (EU Environmental Law & Policy in Ireland) with Andrew Jackson,  Natural Environment Officer, An Taisce