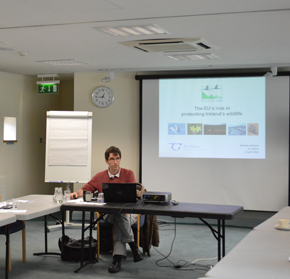 Andrew, a qualified solicitor who recently defended his PhD thesis at TCD ( TRinity College Dublin) on the History of EU Nature Conservation Policy, joined An Taisce, the National Trust for Ireland, in 2013. He began his presentation with a review of current environmental policy creation, which he described as being far less ambitious now than in the 1970s, 1980s and early 1990s. Comparing the 1992 Earth Summit in Rio with the event held to marks its 20th anniversary, Rio +20, Andrew described its less ambitious outlook, with no new agreements having been reached.

Turning to the European Union, Andrew described it as the most ambitious state in terms of regulating environmental issues. However he said that very few new environmental policies are being created or agreed upon by the EU. According to Andrew, this is due to a number of factors including moves to the political right, economic recession, the growth of the EU, and current moves by the U.K. who would like to weaken current environmental protections to make life uncomplicated for U.K. businesses.

However, Andrew did express the general importance of the EU to member states, highlighting that approximately 80% of the environmental rules in a country such as Ireland derive from EU obligations.

Furthermore, Andrew drew attention to wildlife protection and biodiversity goals set by the EU. Despite failing to meet their biodiversity targets for 2010, the EU has set higher targets still for 2020. The rationale behind such high aims, according to Andrew is that the EU sets an international precedent; therefore it’s worthwhile to be ambitious, and raise the standard for all policy makers across the world.

And yet, the mutually contradictory policies of the EU are cause for concern, as Andrew pointed out. The EU Common Agricultural Policy (CAP), which takes up approximately one third of the EU’s budget, has over the past 50 years led to a serious degradation of the EU’s habitats and ecosystems. This conflicts with the efforts of the EU’s wildlife protection and biodiversity protection policies.

Turning his attention to the main instruments within EU that cover wildlife protection and biodiversity protection in Europe, Andrew gave details of the 1979 Birds Directive, which set out to protect wild birds, and the Habitats Directive which aims to protect some 220 habitats and approximately 1,000 species that are considered to be of European interest, and require protection.

Andrew spent time explaining Special Protection Areas (SPAs), which are a designation on the Conservation of Wild Birds, and Special Areas of Conservation (SACs), which are areas that have been given special protection under the EU Habitats Directive.

He explained the Natura 2000 network, an ecological network of protected areas in the territory of the European Union, which is formed by the SPAs and SACs together. Natura 2000 is one of the most significant achievements of EU environmental policy according to Andrew, as it is the largest network of protected areas in the world, encompassing more than one fifth of land territory of the EU. Andrew outlined some of the reasons for the delay in implementing the policy, the resistance with which it was met, and the role of the EU commission in enforcing the policies.

Andrew also examined the politics of the EU policies, and the ways in which member states circumnavigate the policies created to protect wildlife and biodiversity. Furthermore, he highlighted the differences between countries in the percentage of territory that they have designated ‘protected’ for birds and as SACs. 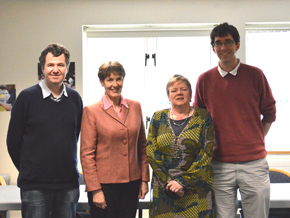 Concluding his presentation, Andrew looked to the future of environmental policy in the EU, which is at an uncertain juncture, as Natura 2000 was recently brought under the RE-FIT (Regulatory Fitness and Performance) review programme. Furthermore, with ongoing debate in the U.K. about their EU membership, there is a risk that environmental policy instruments may be opened for renegotiation with a view to weakening them to make it easier for U.K. business development.

However Andrew said there was reason for hope, and that policy makers in the EU will argue that the network has been a major achievement, extremely successful and very important economically as it provides services to the population for free including water, air and carbon cycle, and as such must be protected.