Editor: Patricia Pak Poy rsm AM was the founding National Coordinator of the Australian Network of the International Campaign to Ban Landmines. She was a non-government member of the Australian Delegation to the discussions and negotiations for the UN Review of the Convention on Certain Conventional Weapons and Protocol II and for the development of the Convention on the Prohibition of the Use, Stockpiling, Production and Transfer of Antipersonnel Mines and on their Destruction, signed first in Ottawa, in 1997. 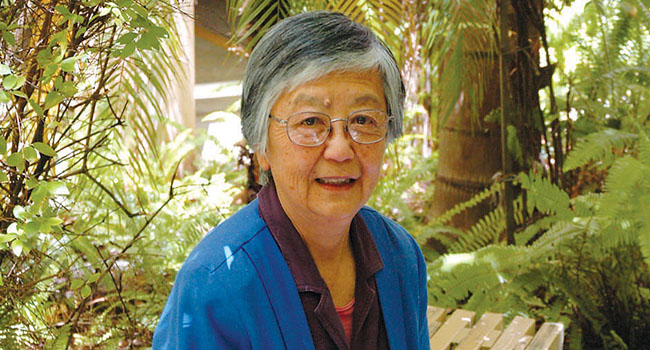 The following article  by Jack Manning appeared in the December issue of The Southern Cross, the official newspaper of the Catholic Archdiocese of Adelaide, South Australia. It is reproduced here with permission.

'In 1991 a petition calling for a ban on landmines was started by an Adelaide Sister of Mercy, contributing to a world-wide movement which continues to have an impact today.

Sr Patricia Pak Poy instigated the petition after a sabbatical in Thailand in 1990, during which time she was exposed to the prevalence of landmines and the devastating effects they had on individuals and communities.
The legacy of her petition is SafeGround, which works towards eliminating explosive remnants (ERW) around the world and is celebrating the 25th anniversary of the presentation of the petition to Federal Parliament on 27 February.

“Over half a million refugees were streaming back across the border with Thailand, trying to find a safe place to settle after 13 years of civil war,” she said.

“Due to the abundance of landmines there was no safe place and many of the returning refugees were being killed and maimed.”

By 1992 Sr Patricia had collected more than 1400 signatures on a petition demanding action on the issue of landmines in Cambodia which was presented to Parliament in Canberra by John Scott, the member for Hindmarsh. In 1993 Sr Patricia founded the International Campaign to Ban Landmines - Australian Network.

The Network joined with a developing international campaign to bring the issue to the attention of the United Nations, resulting in the signing of the Ottawa Convention or the ‘Mine Ban Treaty’ in 1997 and the Cluster Munition Convention in Oslo in 2008.

After the passage of legislation, the Australian Network changed its name to SafeGround to reflect the change of focus from banning landmines to positive advocacy in seeking to make the land in affected countries safe for its people, with the motto of: “reducing impacts of war”.

“In documenting the extent of ERW contamination and publishing the impacts of this contamination to make the information available for those who provide mine action services and for those living in affected communities, our work has served to link under-recognised affected communities with donors who can make funding available for clearance, risk education and victim assistance,” she said.

Due to current conflicts in Afghanistan, Iraq, Libya, Syria, Ukraine and Yemen, there has been an uptake in the use of landmines, improvised explosive devices and cluster munitions.

Globally, there are as many as 300,000 landmine victims, three quarters of whom are civilians, with one third being children.

Mrs Stanger said the statistics highlighted the continuing need for organisations like SafeGround and the significance of its work in making the world a safer place for the international community.

The 1991 Petition undoubtedly had an impact on both Australia and the global community’s commitment to action on landmines, she said, and those who signed it “took part in an action of lasting significance”.

In addition to the national committee, a group still meets in Adelaide and is organising the 25th anniversary celebration of the petition and all it has led to: the formation of SafeGround and the changes in international legislation.

The event will be held on Monday February 27 from 7pm to 9pm at Mercedes College and all are welcome.'