St Mary’s Convent was founded by Venerable Catherine McAuley on 21 August 1841 in response to the request of the Bishop of Birmingham. Catherine accompanied three Professed Sisters and two Postulants with their Novice-Mistress from Baggot Street and stayed with them for a month. Sister Mary Juliana Hardman was appointed the first Superior. John Hardman, father of Juliana, built the Convent in the Pugin style in preparation for the beginning of Mercy in Birmingham. Another of his daughters joined the Convent and a grandchild became a Postulant. John Hardman’s wife came to live in St Mary’s following his death. Within the first 10 years of foundation, St Mary’s founded Convent at Nottingham, Camp Hill Birmingham, Wolverhampton and Maryvale. 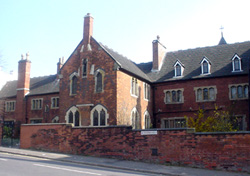 The main apostolic work of the Sisters was education, caring for orphans and girls in need, visitation of the sick and instruction of converts. Many people benefited from the Corporal and Spiritual works of Mercy practised by the Sisters. The constant change and influx of other groups of people into the Birmingham area meant that the Sisters constantly revised their ministries to meet the needs of the new groups and provide them with the resources they needed. 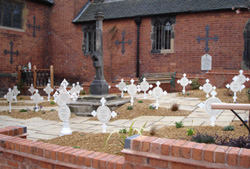 St Mary’s Convent holds a unique place in the history of the Sisters of Mercy in Great Britain. It is a listed building, associated with the famous architect Pugin and it is the last Convent founded by Catherine McAuley, in the year of her death 1841. St Mary’s was bombed during the Second World War and the Chapel destroyed. What remained of the Chapel was extended and an Oratory was dedicated to the memory of Catherine. It contains the Altar and Tabernacle before which Catherine knelt and the prie-dieu used by her during her month long stay in Birmingham.

St Mary’s has become the central hub for the Sisters of Mercy in Great Britain. It has undergone extensive refurbishment and is now open to the public. The interior has been painstakingly restored. St Mary’s has become a place of welcome, active engagement, spiritual enrichment and pilgrimage. It offers time and space to look, listen and meditate. It tells the story of Mercy, is a place for Women and is rich in Heritage. Sisters at St Mary’s will reach out to people of different faiths and cultures in the area, provide a place to uplift the hearts and minds of everyone and help young parents to acquire skills of parenting. The Convent is home to five Sisters. The door will always be open to those in need. 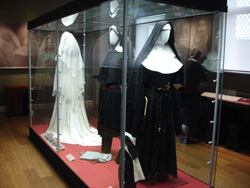 On a crispy, clear spring morning, 3rd March 2005, a large number of people gathered at Catherine McAuley’s last foundation. On the hill in Hunter’s Road, Handsworth, a liturgy was about to take place fulfilling hopes and dreams held in hearts for over 11 years. From the opening line of the entrance hymn in the Chapel “Here in this place new light is streaming ….” to the dying echoes of the “Salve Regina” in the chilly sunshine of the Jerusalem quadrangle, the atmosphere of mercy rising and flowing around us was deeply felt. 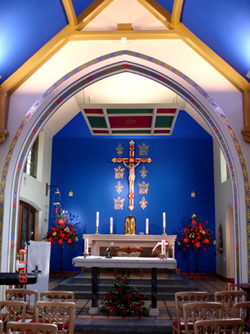 Catherine herself once said that “everything that God permits is a blessing”. We may not always realise the wisdom of this and question “the delays of the Lord”. But on 3rd March 2005 many blessings were experienced during the Mass of re-dedication at St Mary’s from the apt opening words of Sister Evelyn Gallagher’s (Congregational Leader) address, the beauty of Sister Maura Halpin’s singing, the relevance of the Scripture, the inspiration of the Archbishop’s homily to the happy experience of community felt during the entire liturgy. 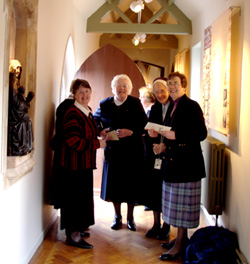 The presence of the “Event Communications” team who designed the graphics and displays, Philip Jackson (sculptor of the beautiful sculpture of Catherine and Juliana) and of the many people engaged in the entire renovation project, all added to the atmosphere of happiness and completeness which was almost tangible. The circle of mercy widened to embrace many Associates and helpers for the great day. 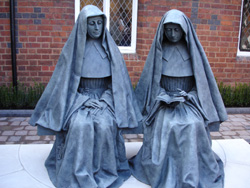 In 1841 the names of Catherine McAuley, John and Juliana Hardman, Augustus Pugin and John Talbot were linked together at the foundation of St Mary’s Convent of Mercy in Handsworth. They each contributed their own special talents and experiences to create “something beautiful for God”. This has been carried on down through the years by the Sisters who have gone before us in Community. In mercy we have touched the hearts of many in friendship and love. May Catherine McAuley continue to inspire us as she advises us to “speak of God, for God and with God”. Now we too can say with the Psalmist “I have loved, O Lord, the beauty of your house and the place where your glory dwells” as we enter with joy the gates of St Mary’s restored and renewed.