Story of a Christmas Card

A Happy and Blessed Christmas

To Sisters of Mercy Worldwide 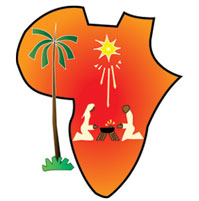 A Sister of Mercy in Kenya gave me the first copy of the design. In the 1980s I used to go to different African countries to help with short term programs related to prevention and treatment of alcoholism and other addictions. The Artist's name was not on the painting. Shortly after I came to Ghana to teach at the University of Cape Coast I came across a young teen-ager who lost his left arm and left leg due to Berouli Ulcer Disease and also as a result of the disease had a crippled right hand and wrist. However, he could get a paint-brush in his crippled hand. His simple paintings of the Last Supper were on the walls at the local hospital where he was being treated. The "attitude" evident on his rendition of Jesus and the apostles touched me. I gave him a copy of my beloved Christmas in Africa card. He added the palm-tree. Like a typical real artist he wanted to perfect each single card

I took one (he had painted it in colors) to a photographer in Columbus where I was still on the Faculty at Ohio State University - told him about the child and that I wanted 250 color copies - which he did at cost - The first 250 had a tiny speck in the reproduction - so he had his technician do another 250; and he could still see the speck. The 3rd 250 were perfect. He asked me to pay only for the perfect ones but gave me the others. I left his store having paid only $105 for 750 beautiful color prints. I could hardly see the defect.

That was in December 1994. All of the cards sold! I had the child do other cards as well. Enough money was raised to eventually get him back into school, pay his fees, and clothe him. Now he stands tall and straight, with prostheses for his left arm and leg and is in his first year at the University of Cape Coast. He lives in the Ahotokrum Mission home for abandoned children - run by the DMJ sisters. However, while school is in session he lives in a dormitory at the university.