On Wednesday, 15 May, 19 student nurses from St Xavier University visited Mercy International Centre, to take a tour of Catherine's House of Mercy, Baggot Street, Dublin. The students were spending a week visiting Ireland, taking in Dublin, Cork and Galway on their trip. 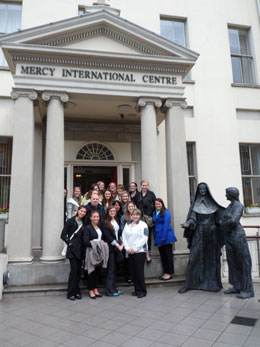 The visiting students, who were accompanied by two teachers, were both third year and final year undergraduates of the School of Nursing Undergraduate Programme at St Xavier University. St Xavier University was founded in 1846, at the request of Bishop Quarter of Chicago. Five Sisters of Mercy travelled from Pittsburgh and under the guidance of their leader, Mother Frances Xavier Warde, they founded the first Mercy College in the world - Francis Xavier Academy for Females.

In 1847 the Academy began to confer degrees and by 1865 it expanded, adding a five-story building at its Wabash Avenue location. In 1871 St Xavier was destroyed in the Great Chicago Fire, however just three years later the Academy was rebuilt on a site on the southern boundary of Chicago.

In 1935 the St Xavier University School of Nursing was launched in association with Mercy Hospital, Chicago by joining the general education program with hospital-based laboratory courses and clinical practice hours, to create an intensive four-year collegiate nursing programme. Since then, the School of Nursing has gone from strength to strength and is now a designated National League for Nursing Centre of Excellence - one of only 17 centres in the US.

The students and staff of St Xavier University enjoyed the tour of the Catherine's house, which enabled them to make a greater connection between Mercy values and the work they will undertake after graduation. In addition to their time in the House of Mercy, the students spent time in Dublin’s Mater Misericordiae University Hospital, established in 1861 under the auspices of Catherine McAuley and the Sisters of Mercy. This also enabled them to see the work of the Sisters of Mercy in action in Ireland.

The nursing students of St Xavier University returned to Chicago after their week-long visit, having experienced first-hand the effect of Catherine McAuley’s legacy.