18th October is European Day against Trafficking in Human Beings. This crime, which has been called 'Modern Day Slavery' affects millions of people across the globe.

In Europe women and girls are trafficked - enticed, tricked or forced - into prostitution, begging, working in homes or factories. They are under constant surveillance. A few escape, but even then find it difficult to have their stories believed. 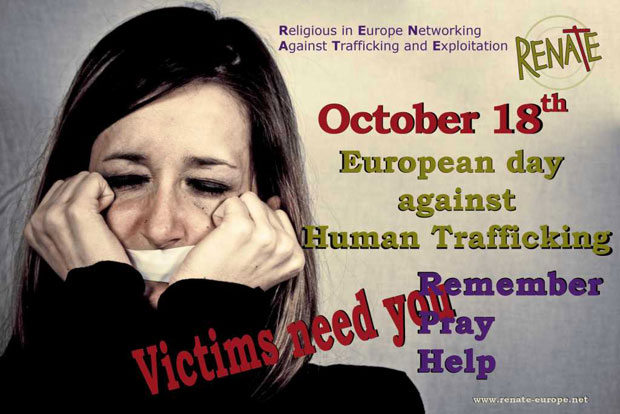 Sisters of Mercy are working with RENATE to counter this crime at a number of levels. At a personal level they are befrienders and counsellors. They provide safe homes as a temporary but much needed measure. They lobby the Government to pass appropriate legislation, and then continue to monitor the way in which laws are interpreted in the Courts. They sponsor research into the crime and its effect on people who have been subjected to trafficking. They raise awareness by speaking to parish, school and other groups, and the media. They pray for the women and girls, and also for a change of heart in the criminals.

Please pray on this day for the millions of people who are trafficked worldwide.

Please educate yourself and others on the causes of trafficking and what you can do to prevent it. Go to

For more information on the work of Sisters of Mercy in Ireland and the UK, visit  APT