Editor: Asylum seekers arriving in Australia may soon be 'resettled' in Cambodia if the Australian government is successful in its efforts to convince Cambodia to enter into such an arrangement with them. 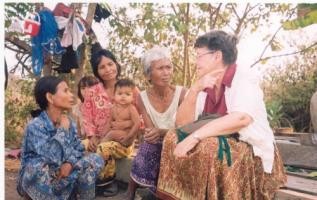 Denise Coghlan rsm, Director of Cambodian Jesuit Refugee Service, has been in Cambodia since 1990 so is well qualified to speak on the situation for refugees in Cambodia. Appearing in the Australian television SBS Dateline programme The Cambodian Solution last week, Sr Denise said of Australia ' It's trying to shelve its moral responsibility and its legal responsibility off into a country that's very poor, has much less space than Australia has, and has not a good record in human rights, it hasn't really established its judicial reform policies, hasn't had proper guidelines for accepting people into refugee status and into citizenship'.

-Australia: government has breached its legal responsibilities towards refugees
The Australian government has breached its legal responsibility towards refugees and committed grave ethical blunders in its application of offshore processing procedures, according to the Jesuit Refugee Service Australia (JRS). Jesuit Refugee Services, 8 May 2014

- A Discussion with Denise Coghlan rsm, Director, Jesuit Refugee Service Cambodia
Sr Denise reflects on her more than twenty years working in Cambodia and how her faith and her sense of justice motivate her work from start to finish. Berkley Centre, Georgetown, USA, May 2010