The Campaign against Trafficking in the Hospitality Sector (MGA)

The seedy world of human trafficking, for the most part, takes place behind closed doors, away from the view of the general public. Women and children who are trafficked for the purpose of sexual exploitation are often hidden away in brothels or hotels, their services publicised on internet websites and their true identities obscured. Opportunities to identify, contact, and rescue victims of trafficking are limited. Those trafficked for use in prostitution, in particular, are moved around constantly and, as a result, those working in the hospitality sector, in travel and tourism, are better placed than most to identify suspicious activity. 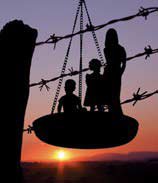 In light of their unique position to spot signs of trafficking, it is undeniably of supreme importance that those employed in the hospitality sector, both management and staff, are aware of what to look out for and of how to proceed if they feel that their place of business is being utilised for this criminal activity.

In the United States, Mercy Investment Services, in partnership with other responsible investors, have had significant success in placing pressure on businesses to increase their anti-trafficking efforts. Notably, they have persuaded influential hotel chains, such as the Carlson and Wyatt groups and airlines, such as Delta, among others, to sign up to the ECPAT Code of Conduct for the Protection of Children from Sexual Exploitation in Travel and Tourism.

The proliferation of the Code, which requires businesses to train their staff to be vigilant, as well as to produce annual reports to report their progress, is an important step in the global fight against human trafficking and has been shown to save lives.

It is our intention at Mercy International Association to promote the widespread adoption of the Code as well as to root out the toleration of trafficking in the hospitality sector at large. Beginning in Ireland, where ECPAT is not yet based, the Sisters of Mercy supported by MIA are seeking to develop a relationship with ECPAT international and to receive advice of how the Code may best be implemented and monitored in the Irish hospitality sector.

The Mercy Sisters in Ireland intend to begin the campaign by making a guest letter, which requests hotel managers to consider signing up to the ECPAT Code, available on the Irish Mercy Congregations website and encouraging members of the Congregation and their contacts to deliver these letters to the hotels they visit. In particular, when organising meetings or large gatherings, it is advised that members, and friends, of Mercy use the opportunity to educate potential venues about the horrific nature of human trafficking and insist that the hotel is willing to act to prevent facilitating it.

In Ireland, we have made contact with a number of other agencies, including Barnardos and Ruhama, who are working on the issue of human trafficking and who may be interested in partaking in a campaign to promote an increased commitment to opposing trafficking in the hospitality sector. The potential for future collaboration will be discussed in upcoming meetings. Additionally, we will be consulting with the Department of Justice’s Anti-Trafficking Unit, in order to see what kind of support they could lend to the campaign.

In order to determine how this campaign can be applied in an international context, a survey has been sent out to Mercy Congregations around the world, with the hope of gauging their level of interest in opposing trafficking in the hospitality sector, as well as assessing the feasibility of such a campaign in various regions. It is our hope that an organised global effort to encourage increased vigilance and moral responsibility in the travel and tourism industry will have a great impact in rescuing victims of trafficking and undermine the proliferation of the scourge of modern day slavery.