The Establishment, Growth and Contribution of MIACOM

Editor: In 1998 at the request of the MIA Members (Leaders) a Communications Consultative Group (CCG) was established with members who had expertise in communication nominated from the various regions. Lynn Dugas - Burke and Jan Hayes rsm (Americas), Margaret Twomey rsm (The Congregation) and Adele Howard rsm (Australia), Co-ordinator, formed the first group with guidance from Doris Gottemoeller rsm (President of the Sisters of Mercy of the Americas, Chair Member MIA).

The decision to develop a plan to facilitate communication recognised the Members' relationships with each other: 'MIA is based on mutual trust which is built up by effective communication'.

MIA believed that 'international Mercy Vision and international Mercy relationships are fostered when good information is available' and were in agreement that an effective communication strategy was necessary if the established Mercy International Justice Network (MIJN) and the newly emerging Mercy Global Concern (MGC) at the United Nations were to be able to engage successfully globally.

At the May 1999 meeting the name for the MIA website was confirmed. The name chosen expressed the global presence of Mercy: www.mercyworld.org The website was the first MIA Communications tool and, being online, signalled the Members' recognition of the importance of using the new communication technologies to achieve the purposes of the Association:

Believing in using a variety of methods to communicate 'both internally and in our cultural settings', the MIA Members also took the decision to support the production of the Mercy World print newsletter in English and Spanish as the international print-based medium of communication for Sisters of Mercy world wide. The newsletter was to be co-ordinated and published by the Sisters of Mercy of the Americas. Lynn Dugas- Burke was the first edition editor and Pamm Shankmann, with the guidance of Stacie Royster, then took on the role as editor of this twice yearly publication. In 2003, responsibility for the Mercy World Newsletter, now an annual publication, transferred to the MIA Administrator, Ethel Bignell rsm, until the final issue was published in 2009. In 2004 the newsletter name and format was changed from Mercy World to MIA Newsletter. Edited by Ethel Bignell rsm, MIA Administrator, it was distributed annually in print and made available on-line on the mercyworld.org website

The Members of MIACOM - Sisters Adele Howard, Helen Marie Burns, Jan Hayes, Mary Conway and Denise Fox - met in Dublin that December and commenced initial planning for an interactive CD-Rom on Mercy and Justice, a project that would take three years to come to fruition. They had successfully initiated a weekly electronic newsletter Mercy E-news in August.

Mercy and Justice Shall Meet (MAJSM) was developed to gather the wisdom and learnings of Mercy Sisters worldwide on specific issues of justice. Each Mercy Institute, Federation and Congregation was aware of the vast wisdom and experience that many of their Sisters had collected over their years in ministry and the dilemma of how best to pass on the valuable learnings of this experience. A multimedia resource was seen to be an effective tool to engage grassroots involvement and to collect the wisdom of grassroots action worldwide.

A Sounding Board chaired by Katrina Fabish rsm (ANZ) was established in 2002. Fraynework was appointed the production company and Elizabeth Manning rsm (The Congregation) at the invitation of her congregation, generously joined the team in Australia to help develop the resource.

A highly successful global search for contributions of material was conducted with contributions coming from Mercy Sisters and ministries worldwide. These images, texts, audio and video resources supplemented the filming that was undertaken in Peru, South Africa, Kenya, Australia, Ireland, England, America and Newfoundland, and helped ensure that the resource was as representational as possible of Mercy in the five geographic regions (Asia Pacific, Africa, North America, Latin & Central America and Europe) .

Updates on the project were posted on the mercyworld.org website so that the Mercy network could follow the development of the CD-ROM throughout the course of 2003. This both helped promote the Interactive as well as engaged people in the process of its development. 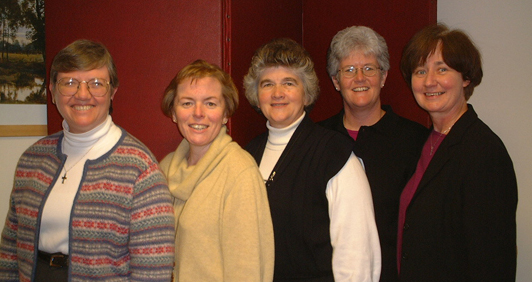 Mercy and Justice Shall Meet  was demonstrated to the leaders in Dublin in May 2004, launched in Australia in September and in Ireland in November. It brought to fruition the inspiration of the Mercy International Justice Network Conference of 2001, the MIA Leaders Conference of 2002 and the Mercy Global Concern support for the UN Millennium Development Goals and the ongoing vision and inspiration of Catherine McAuley. Brought together by the MIACOM group and funded by Mercy Institutes, Federations, Congregations and Funds throughout the world, it was a truly global project of the Mercy International Association.

Mercy and Justice Shall Meet used a narrative approach with the telling of 8 key stories. Three themes underpinned these stories: Violence against Women and Children; Racism in all its Forms; Displacement of Peoples. A theological reflection process underpinned and accompanied the stories which are opened up in the interactive for critique, analysis, reflection and action.

The breadth and depth of the material presented on the CD ROM inspired a new appreciation for Mercy and justice worldwide, both within and without the Mercy network.  Dozens of demonstrations were given in 2005 - 06 at conferences and workshops and in educational contexts, in particular in Great Britain, Ireland, New Zealand, Australia, Kenya, South Africa, the United States and at the UN.

The resource won or was a finalist in a number of prestigious international awards such as the Horizon Interactive Award (US - Winner, Best Education and Training resource), the  New York Festivals Interactive Media Awards (New York – Silver World Medal), the One World Media Trust (London – Finalist, New Media) and the ATOM Award (Winner – Best Multimedia Learning Reference, Australia and New Zealand). This was objective feedback on the quality of the production values.

MIACOM met by conference call regularly and face to face annually, meeting in Melbourne in 2002 with a focus on MAJSM, in Burlingame in 2003 with particular interest in the structure and design of the new mercyworld.org website and in Dublin in 2004.

During their May meeting in 2004 the members of MIACOM looked at the communication implications of Catherine’s Canonisation Cause and at ways to assist MIA and the Vice-postulator, Anne Hannon rsm, in this work. As a result, MIACOM was asked to create the ‘official’ image, of Catherine McAuley for the Cause for Canonisation.

Dual portraits of Catherine were decided upon to serve as the official image. Photographs of the sculptured bust by Michael Burke, created for the opening of Mercy International Centre, which is housed in the Heritage Room at MIC and of the portrait of Catherine executed in the years following her death - by an unknown painter, with the assistance of eye-witnesses - housed in the room where Catherine died, were combined by a designer at Fraynework. Authorised by the Vice Postulator and MIA as the official logo, this now appears on all canonisation materials

In 2006 a reflection DVD on the works of the Sisters of Mercy throughout the world, based on the song Circle of Mercy by Jeannette Goglia rsm (Americas), was produced as a resource to support MAJSM. This DVD used footage from throughout the mercyworld, including from the Eucharist at Westland Row, Dublin, held to celebrate the 175th anniversary of the founding of the Mercy Congregation.

The Circle of Mercy DVD can be watched online here (04:39)

In 2008 the members of MIACOM - Srs Philomena Bowers (MIA Liaison), Denise Fox, Ethel Bignell and Adele Howard - invited Pat McDermott rsm (Americas), Anne Walsh and Ailish O'Brien rsm (The Congregation) to meet with them in Burlingame to address the request from MIA leaders in May 2008 regarding the future of the MIA website. The existing website, which was launched in 2003, had been built primarily for the purposes of disseminating information about MIA to an internal audience. As a result of this meeting, MIACOM would recommend to MIA to rebuild the mercyworld.org website to better serve the expectations, needs and technical capabilities of the diverse audience groups MIA was now reaching online through Mercy E-news and on the web...