The Magic of Candlelight: Human Trafficking in Kansas City (Americas)

Global Action Lived Locally: A Case Study from the Americas

In Kansas City, MO, off notoriously violent Troost Avenue, women of all ages gather for dinner to relax amid candlelight, tablecloths and soft music. Not so unusual, except that this soothing setting is for women who desperately need a respite from walking the streets. Their dining setting is a small room called the Willow Tree off a larger one where meals are served to 200 at St. James Parish.

Often sexually abused as young girls, many of the women are homeless. Many can’t read. A number have skipped probation. Some are transgendered and, as a result, suffer prejudice and violence. For all, troubles with the law prevent them from getting help as basic as food stamps. 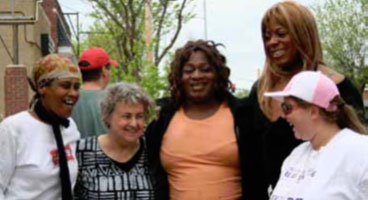 Donna Ryan rsm and Kris Wade saw the need to help women who are victims of domestic trafficking and struggling with finding a new way of life. Often the women have tried to come off the streets and have been in program after program, sliding back into a familiar life, exploited by a pimp. The two created the non-profit “The Justice Project” three years ago to reach women who have been caught in the trap of domestic trafficking.
The project, which emphasizes building community among the women themselves, has received support from Mercy Ministries Grants.

“We deal with American women, not those trafficked from other countries,” said Donna. “The challenge is that the U.S. government is very sensitive to international trafficking. If a woman has been brought in from another country, she can receive support and benefits, and she is called a victim. The women we work with from the streets typically have been traumatized as young girls and owned by a pimp. They are picked up as criminals. They go to jail and do not get benefits.”

Kris herself suffered spousal abuse, homelessness, prostitution and drug abuse. Struggling with the courts in her divorce, she realized that many women give up rather than make their way through the system. Determined to help others, she graduated from University of Missouri Kansas City with a degree in criminal justice.

Following her multiple interests, Donna came to The Justice Project from working with women coming off the streets at Veronica’s Voice. For 10 years, she served as pastoral associate at the Cathedral of the Immaculate Conception. She currently works as pastoral associate at St. James Church, is chaplain at Urban Ministries and works with gays and lesbians in Kansas City, as well as chairing the board of The Justice Project.

Kris has expertise to guide the women through the court system. She takes notes during the Willow Tree dinner, sitting with each woman in turn. The next day she begins her calls to the court, getting the women on the docket to get warrants dismissed. She helps them enter drug treatment programs or strengthen their resolve for programs they are already in. Both Kris and Donna help some find housing and community. The program has helped about 400 women, some just with housing, says Donna, but housing is the key to getting women out of prostitution.

“We close the door at the dinners,” said Donna. “They talk to each other like girl friends, treating each other with respect. It’s a lovely evening with a lot of chit chat, that balm to any woman’s heart. I’m just the grandma, the old nun. They love it. But I don’t give them directions. The important thing is that they help each other.”

The supportive approach works, with patience, but the process can take a long time. Mary was a woman who came in off the streets many times, drifting in and out of programs. After being raped and beaten, she would call Donna and Kris, who offered help once again, visited her on the streets, welcomed her back.

“Mary finally started coming regularly,” said Donna. “She made up her mind she was tired of being abused and went to a program at Truman Medical Center. The center asked her to stay on as staff where she is now a peer counselor. She says it is because we didn’t make her jump through hoops. We had constant, unconditional belief in her.”
The key is, as Donna says, “We don’t say you can’t come back.”

The Justice Project speaks to U.N.

As was reported in e news last week Sister Donna Ryan and Kris Wade travelled to the United Nations where Kris was part of a panel on March 2. The three-person panel addressed issues of international trafficking.
Both Donna and Kris brought concerns and dramatic stories of American women who are trafficked as young teens to work in the sex industry on local streets in the United States.

“I was surprised at how the participants were surprised at our topic,” said Donna. “They are all well-read about trafficking, but never thought about the women on our American streets. There was lots of talk about legalizing prostitution, but Kris (Wade) responded with a strong NO. Legalization only makes it easier for the man and keeps the woman as a tool, an object, degraded and disposed of when she gets to be older.” 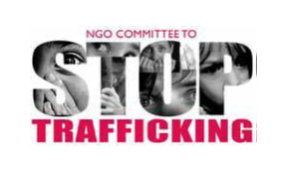