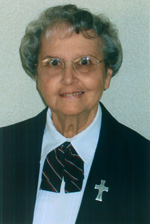 In 1972, a letter went out from the Generalate of the Sisters of Mercy of the Union in Bethesda, Maryland to Sister artists of the nine provinces to consider designing a symbol that could be used to identify us now that we were beginning to wear clothing other than a habit that had long distinguished us as Sisters of Mercy.

At that time, I did not respond because I thought we already had a symbol, designed by Mother Catherine McAuley that we had worn on our rosaries. It was the black ebony cross with the white ivory centre. This cross had so much meaning for me as expressed in Sisters Miriam Gallagher’s poem:

No corpus hangs upon the cross I wear,
No broken hands and feet, no thorn torn head
The ebony and ivory are bare
Of evidence that any blood was shed.

Well fed, well clothed, well shod and housed as well,
Can I invisibly the victim be,
Unless in heart and mind I daily dwell
In spirit with Him on the bitter tree!

Mother McAuley said that our Institute was founded on Calvary and the Mercy Cross helped us to keep this in mind. We are the body of Christ and the invisible ones on that cross. I felt strongly that Mother McAuley would want us to carry on the cross she had designed.

It happened at that time that Sister Mary Josetta Butler (General Councilor in charge of the project) came to visit Sister Mary Silveruis Shields in Loretto, Pennsylvania where I was living. She asked me why I was not designing a Mercy symbol to submit to the Generalate. I gave her my reason. She responded that the Sisters wanted something modern. I told her, in that case, I would design a modern Mercy Cross. I proceeded to design a modern version of the original ebony and ivory cross.

A short time later, I submitted drawings of three versions. One was a small replica of the cross we had worn on our rosaries, encased in silver. The second was a thick silver cross, which was slightly tapered on the ends and highly polished on the surface with beveled sides that would be oxidized. It gave the appearance of a white polished surface center with black oxidized sides. The third was similar to the one worn today.

There were about sixty designs submitted and they were hung on a bulletin board during the 1972 General Chapter. I was not present but was told later that the Sisters were drawn to the modern version of the cross that I had submitted; they identified with it.

After the chapter, there was a meeting at the Generalate in which I was asked to attend. Present at the meeting were Sister Mary Concilia Moran, Mother General; Sisters Mary Doris Gottemoeller, Assistant Mother General; Sister Mary Josetta Bulter and a representative from Schwartz, Kirwin and Fauss of New York, the company selected to cast the design in silver. There was a discussion concerning the second version. It was decided that because of the thickness it would take more silver and cost more per cross. The third version was selected as the design to be used as our symbol. Sometime later Sister M. Josetta sent me a few samples with different silver finishes that she had received from the jeweler for approval. The final choice of silver was made at that time.

A card was to be included in the box with the Mercy Cross. I suggested using the poem “Victim Invisible” because to me it spoke so well of the meaning of the Mercy Cross. Instead, a quotation of Mother McAuley was used:

Mercy is inescapable identified with the Paschal Mystery,
the dying and rising if Jesus! “Followers of Christ must
share the fortune if disciples.”