'The Most Powerful Tool to Become a Leader - Education'

Editor: For four years now Mercy Beyond Borders (MBB), a Mercy ministry partnering with women and girls in Haiti and in South Sudan to alleviate extreme poverty, has invited all high school students to participate in their annual video contest by producing an original 2-minute video on a designated theme about Mercy Beyond Borders' work, drawing on the visual resources and fact sheet information provided. 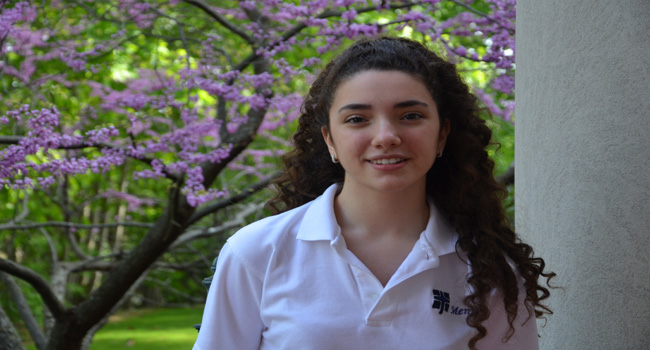 At Our Lady of Mercy Academy (OLMA) in Syosset, New York, where Alexandra Polidoro '16, this year's MBB contest winner is a student, teachers pride themselves on 'Educating Young Women with Faith, Compassion & Promise'.

The topic for this year's contest was Scholars’ Leadership Training in South Sudan.
Here's what Alexandra has to say about why she entered the contest and what it meant to her:

'Mercy’s Communication Director came to me and told me she had a film project that she felt would be good for me. I didn’t know much about it. I didn’t expect to get so attached to it. Once I researched it, I realized how much people go through. It is one thing to watch it on CNN, it is another thing to do a report on it.

I am going to be honest with you. The week before I started doing the film, I helped with the funeral for Sister Kieran Hartigan at Mercy. There were so many Sisters, priests, and alumnae that came in. That day, I felt like I was a Sister of Mercy. I felt part of it. Even though I was just putting coats on a rack for people, that day I realized how much the film could mean to the school; could represent the school. Then I knew, going in, that I wanted to donate the prize money to our school. It was deserved. I wanted to win for the school. I wanted to win for the Sisters.

It all ties in. It is cliché but the whole Circle of Mercy is real. It is so real that it is in Africa and a body of ocean can seem so complicated as a barrier, but I think it is not. The film washed that all away.'