The Naming of the Catherine McAuley Rose

Josephine Mary Agnew rsm (RIP) in North Sydney, Australia, was inspired to have a rose named in honour of Catherine McAuley in celebration of Catherine being declared venerable.

An unnamed rose initially bred in the United States and subsequently introduced in Australia was chosen by Sisters of Mercy in North Sydney from among many unnamed roses at Swane's Nursery in Narromine NSW. The Plants Variety Rights was applied for and granted to the Sisters of Mercy for this rose, and it was officially launched as the Catherine McAuley Rose in a ceremony held on 12 November 1992, in the L'Estrange Room of the Mater Hospital in Sydney.

Valerie Swane, the sister of nurseryman Geoff at Swane's who introduced this rose to Australia and trialled it under Australian climates, was a patient at the Mater Hospital in Sydney and was being treated for a terminal illness. Three months before her death, she officially launched the rose. 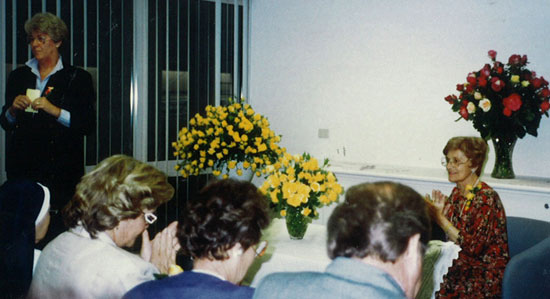 Within her presentation, Valerie outlined a brief biography of Catherine and the legacy Catherine created as Mercy spread to new lands beyond Ireland.

Mary Angela Martin rsm (RIP) wrote the official description of the Catherine McAuley rose which appears on the seed packet: 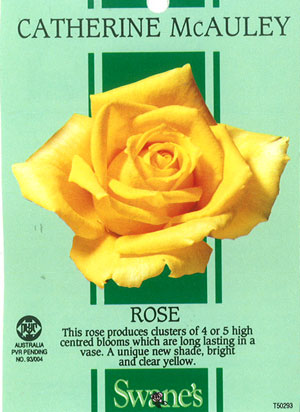 'A Saintly Rose'
This rose is named after Catherine McAuley, a gifted Irish heiress who gathered a group of generous ladies to care for the impoverished women and children of 19th century Ireland. These women formed the nucleus of the Sisters of Mercy, an Order which quickly spread from Dublin through Ireland and the United Kingdom to Australia and the Americas and later to Africa and the Pacific Islands. The radiant colour and delicate fragrance of this rose is reminiscent of the golden haired, gracious Catherine. The clusters of blooms are symbols of the devoted groups of sisters sent by her to bring comfort to the needy. A free flowering rose which repeat flowers quickly.

In July 1994 as Mercy International Centre was celebrating its grand opening, Anna Koeneman rsm - then Congregational Leader of North Sydney Congregation - sent the story and pictures of this rose to Baggot Street. Her letter says:

We have launched this rose in honour of Catherine McAuley. By sending it, we thought this might be a way of being present with you on the 23rd July 1994. Warm greetings from the Sisters of Mercy, North Sydney Australia.