The Queen’s visit to the Royal London Hospital

Following July 7th train bombing many of the victims were treated in the Royal London Hospital, Whitechapel and sadly some died. The bereaved and all those affected were treated and comforted by the staff, some of whom were due to go off duty. Many who were off duty returned to offer their service.

Her Majesty the Queen visited the hospital the next day and offered sympathy and concern for the wounded and bereaved, and thanked the staff for the wonderful way they were coping with the situation. 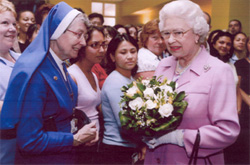 The Queen spoke to Sr M Lawrence who was the only religious in the gathering and asked about her work as part of the chaplaincy team. Her Majesty congratulated her saying it was very good work and Sr Lawrence in turn thanked her for her visit and concern for those involved in this incident.