Archimedes, the great Greek mathematician, says, “Give me a place to stand, and I will move the world.” As I reflect on my ten years’ experience at Mercy Global Concern (2001 - 2011), I am propelled back to a conversation I had with Pat Hartigan rsm in the early days of September 2001.

Pat, an attorney from Long Island, was the initial visionary who applied for and obtained Economic and Social Council (ECOSOC) status for the Sisters of Mercy at the United Nations (UN). Pat did so in 1986 and the Sisters of Mercy became one of the first Religious Congregations to have such membership at the UN. This status enables us to have access to the corridors of influence at the UN. We are NOT negotiators, have no say in negotiations, but we can influence the conversations that are taking place.

The United Nations came into being in 1945 to ensure that the world would never again experience a war like World War II. Since then, it has been a forum of international discussion aiming to creating a global consensus on a host of issues that must be dealt with beyond national level. In my day-to-day ministry at the United Nations, I have had the privilege to meet many people from across the globe who believe that the UN is the place to move the world. Most come with that glow of how things might be different. They come with questions and convictions about the state of our world. At a first glance, things seem so dark... Earthquakes, suffering, hunger, environmental degradation, war and misery seem to abound. As a result, many people feel helpless and opt out, joining the largest majority in the world: those who acquiesce. 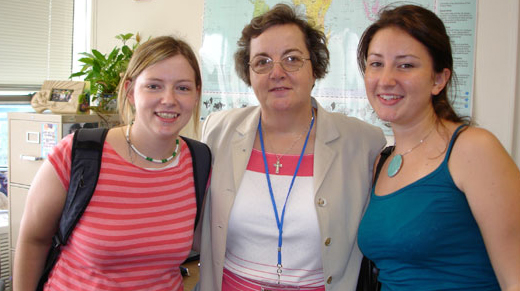 Sr Deirdre in the MIA office with student visitors in 2005

In order to avoid this happening to us, I very quickly realized the importance of broadening ownership of Mercy Global Concern (MGC) and began a series of conversations with key individuals to discuss how at this level we could to remain faithful to the vision of Catherine. (Sisters Philomena Bowers, Marie Chin, Eileen Hogan, Angela Hartigan, Pat Hartigan, Carol Rittner and Ellen Vopicka were key to what emerged.)

Together, we set about envisioning ways of encouraging our Sisters to also become involved in our membership at the UN. One of the first things was to apply for and successfully obtain grants to enable MGC to produce a series of booklets about this important ministry. (Mercy Global Concern – Leaven for Good in a Hurting World; Water is Free Beverage; Where in the World are my Sisters?; Mercy the Language of the Heart; The Many Faces of Mercy.) Secondly, in addition to attending the various meetings and membership of committees, MGC began a series of annual workshops called Bridging the Gap between Policy and Practice. Raising significant monies meant that the programme was open and available to all. Nearly 300 Sisters of Mercy from all over the globe attended these workshops in the eight-year period in which they were offered and lasting networks and friendships were born!

As the world and United Nations officials struggled to find effective ways to eliminate poverty in all its forms, I believe that the key to the success of the Bridging the Gap program was that input came from Sisters living in areas of structural and abject poverty - Kenya, South Africa, Sudan, the Philippines, Nigeria and Cambodia. These Sisters, who work day in and day out with some of our most vulnerable brothers and sisters, gave input and talked about their lived experience of poverty and how policies and unjust practices keep people poor. Their input was not from books but from the heart.

Interacting in the halls of the UN where the heartbeat of the world is monitored, Mercy Global Concern continues to realize that networking is an essential organizational survival skill for the future. Our current director, Aine O’Connor rsm works hard in this regard. As major institutions break, networks are likely to emerge as the creative alternative.

One of the best groups I know and have continued to belong to is Religious at the United Nations, known as RUN. Beyond the paltry efforts of some governments to engage with the questions of our time, a great deal is being achieved by creative networks of people, who name and engage with the crucial issues with a clarity that can put governments to shame.

Some Sisters of Mercy work locally, but we always do so with our eyes on the global, because we know that the human spirit was never meant to live with so much fear and helplessness. We work, believing firmly that another world is possible. Ours is a call to access the incarnation moment in every encounter. Yes, I believe with Archimedes,“Give me a place to stand, and I will move the world.” Each of us stands in that place of possibility. How we use this space is ultimately a question of the heart.

I was both privileged and honoured to direct our office in New York for over ten years.

Thumbnail image: L-r: Srs Deirdre Mullan and Denise Lyttle (Americas) in NY for the 'Bridging the Gap' event (2005), in conversation with a faith leader at the UN