The morning began with registration during which each Young Mercy Leader received a pilgrimage pack and a small stone which they were invited to decorate. This stone would be used later as part of the Opening Ritual. 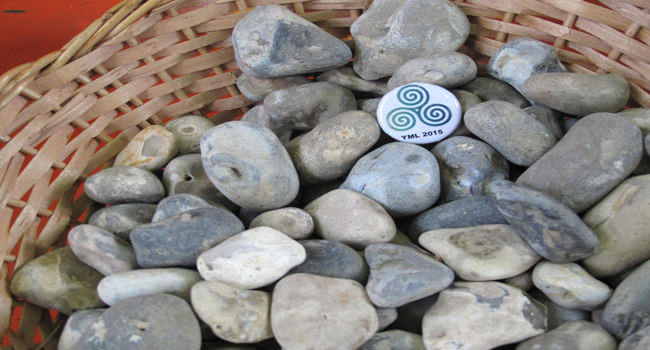 A YML spiral badge among the basket of small stones

Following registration the participants and their teachers/chaperones assembled in the school hall of St Conleth’s College where the energy from the gathering of lovely young people was palpable. Here they were welcomed by Mary Reynolds rsm, Executive Director of Mercy International Association. This was followed by a colourful welcoming ceremony and Opening Ritual.

Ritual: In 1827 Venerable Catherine McAuley lit a flame of Mercy that is still thriving today in 44 locations worldwide. A symbolic flame continues to burn on Catherine’s grave in Baggot Street. The Ritual started with the lighting of the pilgrimage candle from the flame on Catherine’s grave. This flame was then used to light the lanterns which were to be carried by teachers who represented each of the five geographic regions from which the Mercy pilgrims had come. The lighted candle and lanterns were then carried in procession to the centrepiece to the singing of ‘Wake up the world’. The centrepiece draped in shimmering blue represented the movement outward over sea and land of the Mercy flame. 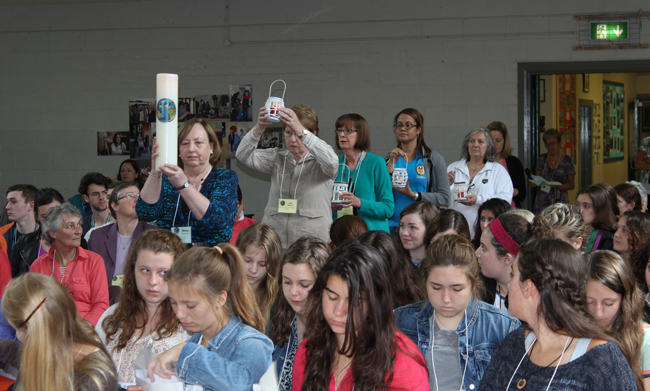 Commencement of the Opening Ritual. Mary Reynolds rsm carries in the pilgrimage candle

Following the official welcome student delegates from each region carried candles which they placed on the ‘stream of mercy’ in the centrepiece and, on behalf of the pilgrims they represented, committed to making the pilgrimage with an open heart.

A roll call followed and each individual carried the stone she/he had decorated to the ‘Stream of Mercy’ and then received a badge with a spiral symbol which represented life – the journey inward and the journey outward to bring Mercy to the world. This was followed by the song 'It starts with you by Paul Whitney from Our Lady of Mercy College, Parramatta, Australia.

A student from each country led the group in prayer and this was followed by a Native American Blessing during which all were invited '….to stand tall in the sunlight….to be aware of the needs of others….to believe in the wonder of life…the miracle of creation….and.…the dignity of the human being'.

All were invited to find someone that they had not previously met and to introduce themselves. At this point the energy and volume really increased in the hall and went up a few more decibels when they were invited rearrange themselves into groups of four.

The young people sang and clapped during the concluding song of the morning 'Sing to God a brand New Canticle'.

The second event of the morning was a lovely and inspiring talk by Áine Barrins rsm (Congregation of the Sisters of Mercy Ireland) on the life and achievements of Venerable Catherine McAuley who donated her entire inheritance to improve the quality of life for the poor and downcast in society. Her presentation which highlighted the relevance of Catherine to today’s world was enriched by a video on Catherine’s life.

After lunch Ailsa Mackinnon rsm (Sisters of Mercy of Australia and Papua New Guinea) in her presentation “No boots and plenty of walking” described the incredible work being done by Mercy Works in Australia, Papua New Guinea and Timor Leste. Mercy Works is a development organisation which assists the needy in these countries.

A full discussion and an evening gathering-in process followed a welcome break. One of the participants wrote in her report on the day: 'there were many beautiful quotes from Catherine McAuley but the one that stayed with me was "the poor need help today not next week"'.

The day ended at 4.30pm. As some of the participants had been travelling overnight and others from 4.00 am yesterday morning an early bed beckoned!

13 July: Making ready at MIC for the arrival of the Young Mercy Leaders