Two sisters from the newly-formed Mid-Atlantic Community in the United States recently celebrated their 100th birthdays. 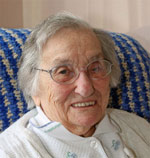 Born in Chattanooga, Tennessee, on Easter Sunday in 1907, Sister Mary Paul attributes her long life to “going to chapel and Mass every day, a positive attitude, and daily crossword puzzles”. “I do not know what I would do without my strong Catholic faith” says Sister Mary Paul. “I do not know how people exist without religion”.
For thirty years, Sister Mary Paul taught at Gwynedd-Mercy College in Gwynedd, PA. In her later years, she served as the archivist at Fitzgerald Mercy Hospital in the Philadelphia area until she retired last year at the age of ninety-nine. 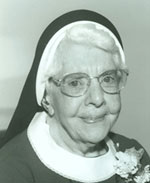 Sister Mary Charles entered the Sisters of Mercy in Cresson, PA, in 1926 and became perpetually professed in 1932. She earned a Bachelor of Science degree from College Misericordia in Dallas, PA, in 1943. She taught Secretarial Science Courses at Mount Aloysius Junior College in Cresson, PA for forty years and served as support staff for another seven years. In 1988, she entered the prayer ministry at McAuley Hall in Cresson, PA.