'Water, water, everywhere, Nor any drop to drink.'

This lament of the Ancient Mariner in Coleridge’s poem echoes loud and clear today as we approach World Water Day on March 22. 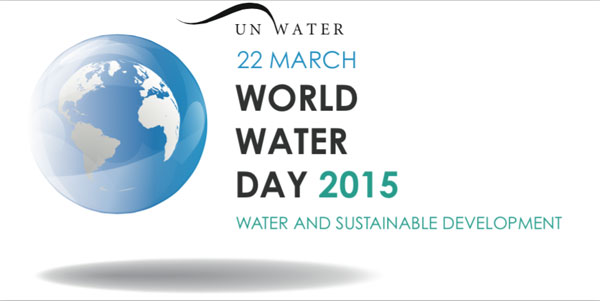 Water covers almost three-fourths of our little planet’s surface but almost all of it is laden with salt. Less than 3 per cent is fresh and of that small portion even less is fit for us and other creatures of Earth to drink. Even more critically, we can’t manufacture more water. Water can only recycle itself, and unsustainable water use endangers this vital process.

So what is Mercy Global Action doing to change those numbers?
In solidarity with ourSsisters worldwide and drawing on their first-hand experience and expertise in addressing the human right to water and sanitation, Mercy Global Action continues to build a strong case for a world in which water is sustainable (think no more contaminated or wasted water), equitably available to all (think not trekking miles to a common well), and acknowledged as a public good rather than a commodity to be bought and sold for profit (think no longer selling water rights or having bottled water unnecessarily drive up household costs).

As we speak for the human right to water at the UN, we focus on the systemic and root causes of global water injustice. This includes scarcity, privatization, overconsumption, and freshwater loss. We ask: What are the forces driving this? Who benefits? Who bears the burden?

The former UN Special Rapporteur (independent expert) on water and sanitation has challenged Member States to focus on the most marginalized groups, on women and girls, and on the rural poor. Her response to those who speak of progress toward correcting imbalances warns that “an appearance of progress is masking profound injustices.”

In concert with this voice, we have provided a list of ways in which these injustices can be addressed:
1. Guarantee the human right to water and sanitation;
2. Recognize water as a public good, protected as a public trust and not commodified or privatized;
3. Use public finance and the public sector to invest in and service adequate facilities and infrastructure;
4. Prioritize water for human consumption, food production, and protection of ecosystems rather than for industrial consumption or unsustainable energy production;
5. Manage wastewater transparently, effectively, and justly;

6. Place a moratorium on extractives where water is in limited supply for farmers, fisher folk, and indigenous communities;
7. Recognize the violations to the human right to water and sanitation perpetrated by governments and corporations;
8. Acknowledge that the issue of water is closely linked to climate change, human rights, gender inequality, and health, among other issues.

In the upcoming session of the Post-2015 intergovernmental negotiations, March 23-27, 2015, Mercy with colleagues in the Mining Working Group and the Blue Planet Project of the Council of Canadians will continue its advocacy efforts around the explicit naming and realization of the human right to water and sanitation in the Sustainable Development Goals. The Mining Working Group recognizes that water is life, sustains life, and has independent rights to integrity. Therefore, water must not be considered a commodity to be bartered for profit, and the human right to water and sanitation must be enshrined throughout the new development agenda.

On Monday, March 23,2015, in celebration of World Water Day, Mercy with its colleagues will co- sponsor a side event at the UN on “Rights-based Perspectives on Indicators and Means of Implementation for Water and Sanitation.”

As UN deliberations continue on creating the Post-2015 Development Agenda, Mercy Global Action will also continue to advocate at the UN for these justice concerns intimately related to the future of water justice. We concur with renowned water and human rights activist Maude Barlow in her assessment of water’s indispensable role in the future of creation: 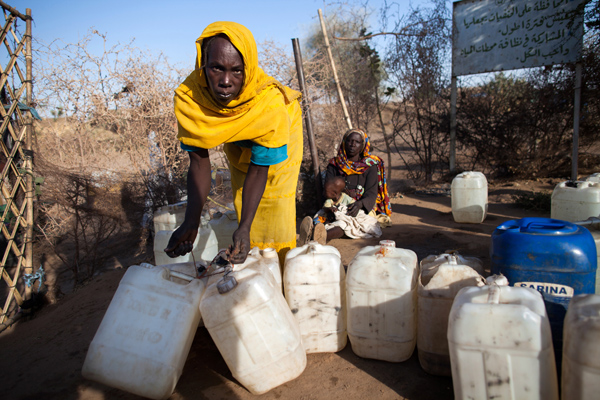 Water Scarcity a Problem at IDP Camps in North Darfur
Internally Displaced Persons (IDPs) at the Nifasha Camp in North Darfur, have access to water only two hours in the morning, not enough time for all to be fully provided. A woman leaves a water access point with empty jerry cans just after the enforced closing time. UN Photo/Albert González Farran. Photo # 577172 . Used with permission

If water will in fact exist in the future, we must believe and act on the present reality that: Water is a human right and must be shared more equitably; water is a common heritage of future generations and must be protected as a public trust; … water has rights too, outside of its usefulness to humans; water can teach us how to live together if we will only let it. This means embracing a new water ethic – a different approach to our moral obligation to preserve this irreplaceable, life-giving gift.

The Ancient Mariner would heartily agree.