Are you wondering who stood up and joined with you in this symbolic action?

Here is a sample of messages received: 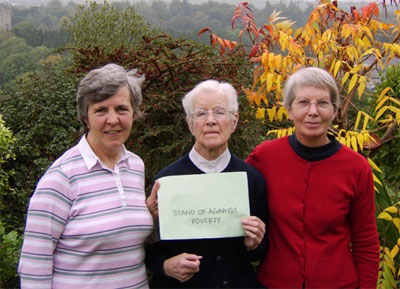 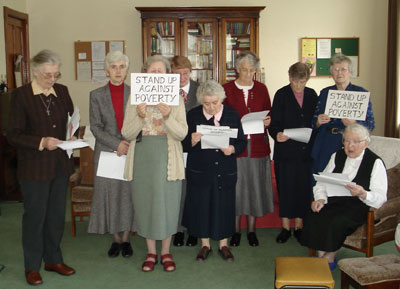 Sisters of Mercy in Sligo Stand Up

In Ard Scoil Mhuire in Dungarvan we all stood up in our classrooms at the same time and read the pledge.

Official Guinness Verification:
The world record for the most people to 'Stand Up Against Poverty' in 24 hours was set on 15 - 16 October 2006 for the United Nation's Millennium Campaign and involved a massive total of 23,542,614 participants in 11,646 events around the globe.

Actually many, many more stood up later on 16th and on the 17th- which was International Day for the Eradication of Poverty - so the real number of concerned people is even greater. Well done!

Let’s keep calling on the 189 world leaders to honour their word. Six years ago, they solemnly agreed to end poverty and achieve the Millennium Development Goals by 2015. Together we can make a difference!

YOU DID IT - A NEW WORLD RECORD!
91,987 Australians joined over 23 million people around the world to set the World Record for the most people to Stand Up against poverty. Events were held in 321 locations around Australia with a total of 11,646 events in 87 countries. A Guinness spokesperson called it the "largest single-coordinated movement of people in the history of the Guinness World Records."

Members of the Parramatta Congregation had 66 Sisters and who stood up and said the pledge with great gusto!. Thank you to our New Life participants who joined in and to our Sisters at Cronulla and all our other Sisters who supported this event.

CONGRATULATIONS & THANK YOU for all of your support, enthusiasm, and dedication to the eradication of poverty and the achievement of the Millennium Development Goals. Keep the momentum going!

Two of the Goulburn Sisters of Mercy had the opportunity to stand up for poverty outside Parliament House, Canberra, Australia. Members of Parliament, including the Leader of the Opposition, addressed the crowd. Each of them highlighted the need to achieve the Millennium Goals and promised to do what they could in this regard. Senator Rachel Siewert (Australian Greens) particularly reminded us that in Australia the Indigenous Aboriginal Australians are one of our most disadvantaged peoples in relation to poverty.

Pam Thompson and Mary-Ann Lennon from Cairns Mercies stood up and read the pledge to eradicate world poverty. We joined about 200 young Cairns people who gathered on our Esplanade last Sunday evening. The gathering was organised by young men and women from the "Oaktree Foundation". Mary-Ann Lennon rsm Cairns

Here in Perth Western Australia 85 Sisters and friends Stood Up for Poverty. At McAuley Aged Care Hostel and Mercy Village there were 70 and 15 in smaller groups around the City. There has been a positive response and we hope to continue being active.

Editor:Did you stand up? Send your message and photo to contact@mercyworld.org and we'll add you to this report.