'Welcome Home!' With these words, many thousands of pilgrims - Sisters, Associates, Partners-in-ministry, students and alumni of Mercy schools, and other friends of Mercy - have been welcomed to Catherine McAuley's first House of Mercy in the past twenty years.

With the decision to hand Baggot Street over to Mercy International Association, a definite choice was made to have Baggot Street be "Home" to the entire Mercy world. Since the re-dedication of the Baggot Street house as Mercy International Centre, in 1994 literally thousands of members of the Mercy family have chosen to journey to Baggot Street to visit the source and wellspring of Mercy and take part in a programme on offer. These programmes have covered a variety of themes relating to Catherine McAuley and the early women of Mercy, Mercy charism and spirituality, the mission of Mercy today, vowed life, association, Mercy leadership, Mercy themes in scripture and theology, and other related topics. 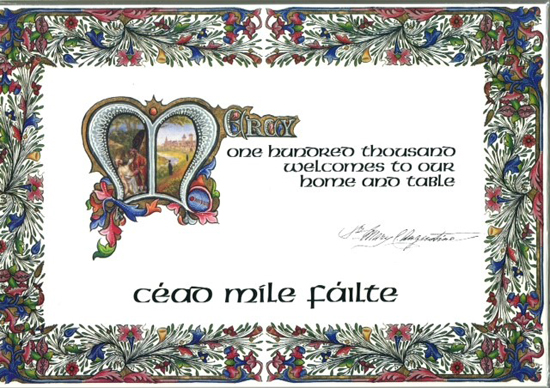 As we celebrate the 20th Anniversary of Mercy International Centre, we remember the thousands who have come with the intention of learning more about Catherine McAuley - the one whose vision and initiative was the spark that kindled the spread of the Mercy flame across the world. We rejoice in the fact that this house continues to draw women and men of Mercy, the young and the old, vowed and committed lay leaders of Mercy ministries to immerse themselves in Catherine's spirit and drink deeply from the well of Mercy

Accompanying this article is a listing of the various programmes that have been offered at Baggot Street and reflections by some of the participants of these programmes over the past twenty years. Here are a few highlights of the development of various programme offerings:

In the early years, programmes were offered in the months of September through April, allowing the focus of Ireland’s ‘tourist season’ to be on the many groups who came to Baggot Street for tours. Tours were offered multiple times a day, six days a week (closed on Mondays). One of the programmes that offered early in MIC’s history and repeated with some frequency was a Beginnings and Endings Retreat led by MIC director Patricia Ryan, rsm (USA). This programme was designed for Sisters of Mercy who were transitioning out of elected leadership into new ministries. Several silent directed retreats were also offered in the initial years of MIC. While participants found the experiences of these silent retreats rich and meaningful, feedback encouraged the MIC team to look for pilgrimage-type options that did not necessitate a silent atmosphere. With people coming from all around the Mercy world, there is a desire to engage one’s companions from new countries!

In the accompanying article, Catherine Experiences at Mercy International Centre, Anne Reid talks about the development of Catherine-related pilgrimages that were designed to have groups experience Catherine in her sacred places and spaces. These programmes of varying lengths and derivations of content have included Come Home to Catherine, Walking and Praying with Catherine, and Praying with Catherine in her Places and Spaces retreats. Each of these programmes has received excellent reviews with many people suggesting all Sisters of Mercy and Associates of Mercy should have the opportunity to experience this programme. The attached listing of programme offerings in the past 20 years indicate these programmes have been offered over 225 times at Baggot Street, and they continue to be offered today.

Around the turn of the millennium, the Institute of the Americas began designing and offering a final vow programme for sisters who are either preparing for final vows or have recently made final vows. While designed by incorporation ministers in the Americas, these programmes have been opened to all Mercy congregations worldwide with women near final vows. At this point, the final vow programme is held in every two years (2011, 2013, 2015...) and the most recent programme in May 2013 had eight participants – two from each of the following countries: Kenya, Peru, Philippines, and USA.

For the tenth anniversary of the founding of MIC, the MIC Team, congregational leaders and formation personnel developed a Multi-Cultural Programme that was offered to sisters in the formation process around the world, at special invitation by their leaders and formators. Within the first year, forty sisters from thirteen countries participated. These programmes were held from 2004-2009.

The former Melbourne Congregation and the current Brisbane Congregation were early developers of a pilgrimage for lay leaders of Mercy ministries. These pilgrimages that often host about 30-35 people each time have been offered annually or every two years by each of these congregations for at least the past dozen years. They integrate history and heritage-related activities such as having input by a noted Irish historian on the social, political and religious milieu of Catherine’s time followed by the exploration of Catherine’s story in visits to MIC, Coolock, Georges Hill, St Teresa’s Church on Clarendon St, and walking the streets of Dublin. In addition, there are programme pieces on Mercy Leadership (often led by Dervilla Byrne rsm and Mary Reynolds rsm – both from Ireland), Mercy Mission and Values (often led by Maria McGuinness rsm of Ireland), and the global reach of Mercy today with input from Mercy International Association’s Global Action Team and representative at the United Nations.

Mercy Health System, St Louis Missouri, has also been a very faithful longstanding group that has brought their lay employees on pilgrimage each year. These leaders attend a three-year programme on Mercy mission and leadership held in the USA, and at the end of the programme they have a two-day pilgrimage to Dublin. In many years from 2008 onwards, there have been over 150 lay leaders participating each year in four different groups annually.

2011 brought two new styles of programmes that have been popular in recent years. One is a month-long renewal programme for Sisters of Mercy: Watering the Roots at the Wellsprings of Mercy. The flow of this month-long programme is broadly based on the movements of theological reflection, and includes a week of looking at the context in which vowed religious life is found, followed by two weeks on inspiration from scripture and our Mercy tradition, and a final week on spirituality or applied theology. It draws on the expertise of our Mercy scripture scholars and theologians, and has had participants from Aotearoa New Zealand, Australia, Canada, Great Britain, Ireland, Kenya, Papua New Guinea, Peru, Samoa, United States. The diverse countries of origin and extended time to bond and develop relationships have allowed participants to touch into our global Mercy realities in new and profound ways. The next renewal programme is this June 2014, and then it will be offered again in July 2016.

The second new programme begun in 2011 is the Pilgrimage of Young Mercy Leaders. At the outset, this pilgrimage was seen to be a one-time event while World Youth Day was 'in the neighbourhood' - being hosted in Madrid, Spain. The original idea was to bring all of the Mercy schools participating in WYD together for a joint Mercy pilgrimage in Dublin in the week prior to the experience in Spain. 143 students and staff from 25 schools in Aotearoa New Zealand, Australia, Great Britain, Ireland and the United States participated in the 2011 Dublin Pilgrimage of Young Mercy Leaders.

Recent demographical information of the pilgrims who come to Mercy International Centre for programmes reveal that there is a trend toward increasing numbers of lay leaders of Mercy ministries and student groups from around the world partaking in offerings at Baggot Street. A chart summarizing participation from May 2012- May 2013 programmes shows: 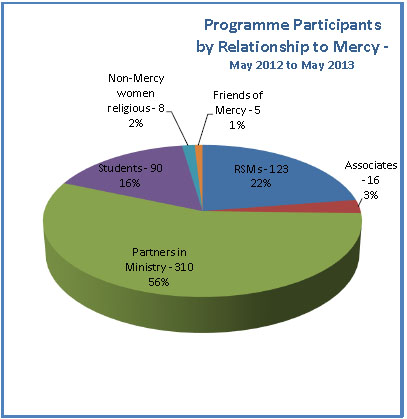 The team at Mercy International Association continue to look at creative ways to respond to the new and emerging needs of the Mercy family for programmes in Mercy heritage, leadership, mission, ministry, and spirituality.

May the inspiration found by participants in these and future programmes continue to enflame our world with God's loving Mercy.

Some reflections from participants in MIC programmes (PDF)
Programmes offered at MIC: 1994-2014 (PDF)

On iOS devices we recommend the Puffin Browser app which will allow you to view Flash-based content (the slideshow/ image gallery) on your iPad, iPhone and iPod.