Anne Murphy rsm undertook what started as a simple, manageable effort to collect clothes, games, toiletries for the 600+ unaccompanied children, ages 13-17 deposited at a naval base in southern California. 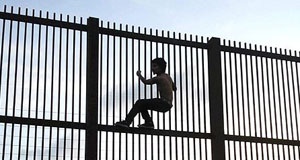 Sisters, Associates and friends were also moved by the stories of the children. Monetary donations and donations of “goods” for the children flowed in. Anne’s office became a storehouse for the bags and boxes of goods. She prowled stores for good deals on items that could be helpful for the children, including 27 soccer balls. On 6 August Anne and another Sister of Mercy, Jean Evans, had the car packed for their overnight sojourn to southern California. They planned to leave at 11 a.m.

At 7:30 a.m. of the day Anne and Jean were to leave, Suzanne Soppe, in southern California, received word that of the 600+ unaccompanied children, some have been placed in foster care and all will be moved by the end of August, with no word about where children are being housed. As a result of the planned move, the organisation Anne is working with stopped accepting donations. Suzanne immediately rang Anne and the planned trip came to a halt.

The car was unpacked and the goods placed in careful storage, awaiting word of where they might be delivered. At the present moment, there is a call for duffel bags and backpacks. These will be filled and given to children who are being placed in temporary care at places not identified for public information.

We knew there were children in other locations and the challenge was to find them. Due to safety concerns, those housing the children can’t talk about it. With the helpful suggestions of Dignity Health Mission leaders, and the Office for Refugee Resettlement at Catholic Charities, Santa Clara, we found another location in Southern California. They were thrilled to have the possibility of receiving the goods we had collected. This group has children of all ages and some of the young women have their own babies.

St. Mary’s Hospital, San Francisco at the request of Sr. Mary Kilgariff rsm and with the backing of Dignity Health, has agreed to cover the cost of shipping all the items to Southern California.

Anne’s shopping is not over however! She received another check this morning from the pastor of a parish in San Francisco who heard about the effort and wanted to help. And yes, the sport bags are being collected so that as the children move from the location they are now, into foster care, they have something to carry their belongings in.

How can you help?

Pray
Join in the Institute's call for prayer.

Advocate
Advocate with the Sisters of Mercy to call for action in addressing this crisis.

Financially
Financial contributions will assist Sr Anne to purchase permitted items (see above). If you, your community, ministry, family or friends wish/are able to contribute, then you can do that online here or in person or by mail to: