What Should We Be Doing?

I have been both saddened and perplexed watching the nightmare of the “rescued” refugees unfold at the Channel Tunnel and other ports in Europe, as thousands of desperate people fleeing from hunger, war, traffickers and economic disaster try to board lorries and trains in search of a better life. I feel both a sense of helplessness and hopelessness as I watch nations erect fences and barricades, fire tear gas and shut out helpless destitute human beings who are at the very least entitled to our compassion as fellow human beings. I am propelled back in time to our own country and the stories of our collective foremothers and forefathers fleeing this tiny island in search of life in new lands, where hunger and religious persecution were not the norm. 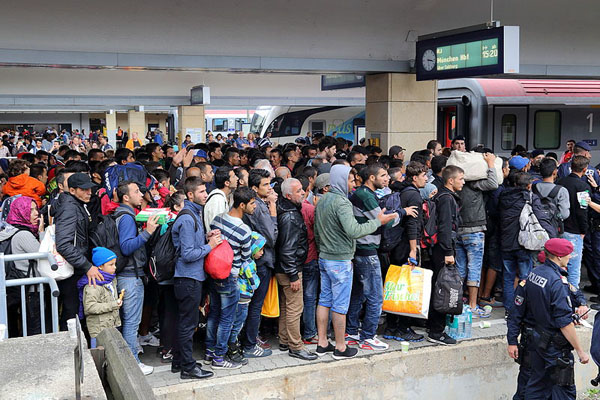 It is true that we are living in the most atheistic epoch of all times. In the saturated sea of tensions that surround us, I ask the question: What has happened to us as a species? Have the four isms ? individualism, materialism, minimalism and hedonism ? so consumed our collective conscience that we can switch off, or airbrush out the anguish and terrible suffering that is happening just a few hours away?

Having visited refugee camps in Sub-Saharan Africa, I have some idea of why people might want to run away. Most of the people huddled in Calais or in other European ports are fleeing either economic injustice or IS militants in Syria and elsewhere, and have crossed the Mediterranean in sinkable boats which have already cost thousands of their lives. Their suffering, which many of us glimpse from the comfort of our armchairs in front of our television sets, is clear and direct and reminds us that consumerism and trafficking are faceless; they are without conscience and unrestrained by anything other than their own materialistic dynamics, and thus incapable of having moral responsibility. In June 2015, the United Nations Refugee Agency (UNHCR) reported that the number of people FORCIBLY displaced had risen to 59.9 million, up from 37.5 million only a decade ago. That statistic means that one person in every 122 of us is a refugee!

I am personally touched and concerned every time I hear about Sudanese refugees. Why? For the past four years, a group made up of educators, students co-workers and friends have been working directly with the indigenous peoples of the Nuba Mountains region in Sudan. I know in my heart that if I too was living there and a victim of my own government’s scorched earth strategy, I too would run away.

The isolated Nuba Mountains region of Sudan, on the border with South Sudan, faces the worst hunger crisis in the world today. Conflict between rebels and the Sudanese Government has forced hundreds of thousands of people from their homes since 2011. Aerial bombardment has made farming impossible. Lack of food has led to the hunger crisis. Children in school cannot concentrate on learning because of fear.

During the period 2013-2015, more than a million people have been displaced and hundreds of thousands brought to the brink of starvation while enduring a Khartoum-imposed humanitarian blockade, which has seen their livelihoods annihilated by relentless aerial attacks on agriculture ? with no prospect of relief aid. Some 300,000 have fled to South Sudan and Ethiopia to refugee camps that offer poor conditions and are vulnerable in a wide variety of ways. Thousands have died.

Two years ago, so much of this was visible, and yet it proved more convenient ? politically and otherwise ? not to press Khartoum to relent on its indiscriminate bombing of its own civilians and to end its humanitarian blockade of both the Nuba Mountains and Blue Nile. The chief tool early on was simply a denial of the evidence, evidence that soon became incontrovertible.

What I remind the students with whom I interact in my capacity as a consultant to UNICEF is that our world is in desperate need of the kind of servant leadership so clearly demonstrated by Mercy Sister Cathy Solano from Australia and American doctor Tom Catena, known as “Dr Tom”. These two heroic individuals, who live and work in Nuba, are shining examples that there is moral good in our world. When I invite young people to reach out and make a difference in our hurting world, I encourage them to ask questions ? and to keep asking questions. As a network of Mercy schools, we have built a school and provided hundreds of scholarships in the Nuba. Children in two small schools in Donegal pledged ten euro of their confirmation money to buy a school uniform for a child. We have pictures of these children hanging in our classrooms as a reminder that their plight is our plight too!
The interruption of children’s education is a real cause for concern.
What is our role when we know that genocide is happening today in Nuba and elsewhere? What is our role when we know first-hand that genocide is happening and is deliberately directed at people and children with whom we have interacted, some of whom we have got to know by name and worked with for the past number of years? Do we have a moral responsibility? How can we encourage, teach and bear witness to the kind of servant leadership so clearly lived daily in the Nuba by Sister Cathy and Dr Tom? The values of servant leadership ? putting others first and leading from the heart ? need to emerge from every corner of our world if we are to save ourselves from the toxicity and anxiety which has too often become the order of the day. Each of us who call ourselves Christians might well ponder the question: If you are indeed a Christian, what can I depend on you to do?

When we exercise kindness and compassion, we realize that love allows us to slip gently into the life of another, and together is always better than going it alone.

Deirdre Mullan rsm, PhD is a Sister of Mercy from Ireland who works with UNICEF at United Nations headquarters where she is working on a project Partnering Religious Congregations with UNICEF. She is also the Executive Director of the Mercy Reaches Mercy project educating girls to educate girls which has built many schools around the word and provided hundreds of scholarships.