Where Sisters of Mercy Minister: Belize (34) 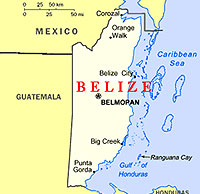 Belize (formerly British Honduras) is a small country in Central America, east of Guatemala and bordering the Caribbean Sea. It is the only Central American country with English as the language of commerce and education. Mayan people were its earliest settlers, and there are various other racial and ethnic groups who call Belize home, including among others: Garifuna, a blending of Caribbean and African; Mestizos, mixed blood of Mexicans and Yucatan Mayans; and Creoles, an intermingling of the early British settlers with African slaves. The majority of the population is Catholic, and the economy is based primarily on agriculture. There is a significant incidence of moderate to severe malnutrition, and road travel is difficult with unfinished and washed out roads.

The Sisters of Mercy arrived in Belize on the morning of 20 January 1883 in a response to a request by two Jesuit priests for them to teach the children in Belize. The seven sisters from New Orleans Louisiana (United States) established the first foundation in Central America and the Caribbean, and proceeded to start an English school and a Spanish school. These later became elementary and secondary schools.

Today there are 16 Sisters of Mercy who live and minister in Belize, all of whom belong to the Sisters of Mercy of the Americas, CCASA Community (Caribbean, Central America and South America Community). They sponsor St. Catherine’s Academy in Belize City, Muffles Junior College in Orange Walk Town, Mercy Kitchen and Mercy Clinic in Belize City, and the House of Mercy in Big Falls, Toledo, and the Guadalupe Spiritual Life Center in Belize City. In addition to these sponsored ministries, sisters minister in a diocesan office for faith and justice; serve as the director of religious studies at the Monsignor Castillo Diocesan Center, volunteer as a tutor and in the neighborhood, provide community services in communications and database management, and provide additional educational and health care services.

In terms of some of the sponsored ministries, Saint Catherine Academy has a student body of approximately 500 students and exists to assist young Christian women to achieve their potential. The pictures below show some of their campus and student body. 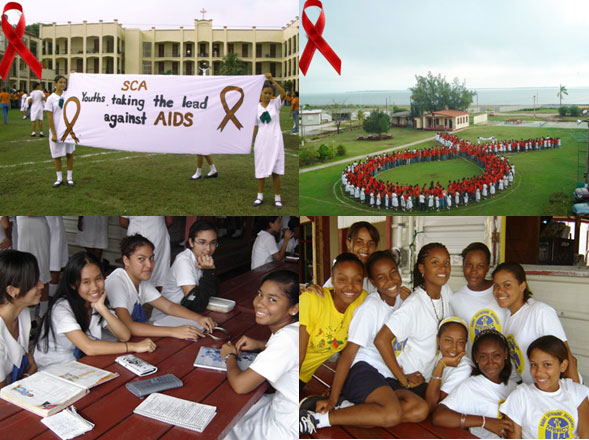 Our Lady of Guadalupe Mercy Center is a Spiritual Life Center that is committed to: providing opportunities for holistic development; assisting individuals to become aware of themselves, God, and others; fostering and developing lay leadership in the Church of Belize; addressing justice issues pertinent to society; and addressing the needs of the economically poor. Over 1600 persons participated in the Center's offerings during the past year.

Mercy Kitchen and Mercy Clinic are housed on a shared campus in Belize City and serve the needs of Belize City's economically poor. These programs are known collectively as Mercy Care Center. Mercy Kitchen was founded in 1987 through the generosity of a wealthy businessman who was deeply troubled after encountering a fellow colleague who had fallen on hard times and become homeless. Upon realizing that there was no place to refer his friend for a hot meal, the businessman made his first contribution to the development of Mercy Kitchen. It remains the sole provider of daily meals to the elderly poor and homeless in Belize City, and accepts referrals routinely from the government hospital and Belize Social Welfare Department. In 2001, the Kitchen began a home-delivered meal component. Meals are delivered to those guests who have become too frail to visit the Kitchen and are at risk of malnutrition. In addition to nutrition services, Mercy Kitchen provides socialization activities, spiritual enrichment programs as well as bath and laundry facilities for the homeless.

Mercy Clinic dates back to 1957, and provides holistic primary health and human services to persons 60 years and older who live at or below the poverty level. It is the only specialty geriatric facility in Belize. Services provided include outpatient primary healthcare, health education, home nursing visits and palliative care. In addition to clinic visits and an in-house pharmacy, it provides basic diagnostic procedures such as glucose testing, blood pressure screening, hemoglobin testing, and ECG testing. Case management includes referrals and follow-up to specialty clinics, government lab/radiology, Belize Council for the Visually Impaired (for eye care) and transfers to the government hospital's emergency room.

Mercy Clinic and Mercy Kitchen which both address various needs of the elderly are essential to the wellbeing of the Belizian elderly as scarce resources have traditionally been targeted to help younger populations. The combined entity Mercy Care Center remains a strong advocate for elderly care and played a key role in the development of Belize's newly adopted National Policy for Older Persons.