Where Sisters of Mercy Minister: Cambodia (22)

Parliaments of Cambodia, Laos and Vietnam have signed an approval to expand their role in the development triangle for the three countries, according to a joint statement released on Friday, July 9, 2010. This agreement allows for a joint-controlled border point, regular meetings of the provinces of the three countries, and a joint website with an international language of English and the national languages of the three countries. It is hoped that the development triangle, which has an area of 111,000 square kilometers and a population of 4.2 million people, will boost each country’s economy, promote tourism and the exchange of culture, and assist the countries to cooperate further in the advancement of social order and security and the reduction of poverty.

At present, the development triangle covers ten provinces in the border area of the three countries, including Kon Tum, Gia Lai, Daklak, and Dak Nong in the Central Highlands region of Vietnam, Attapeu, Saravan and Sekong in the south of Laos, and Mondulkiri, Ratanakiri and Stung Treng in the East of Cambodia. 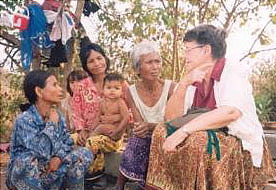 Picture of Denise Coghlan rsm (Institute of the Sisters of Mercy Australia, Brisbane Congregation) with women and children from a village in the northwestern part of Cambodia.

The Sisters of Mercy have been ministering in the Cambodia, Laos, and Vietnam area since 1987 when Denise Coghlan rsm moved to Thai-Cambodia border and began her ministry with Cambodian and Vietnamese refugees displaced by the proxy war between the United States and Russia/Vietnam. This ministry was a partnership of Mercy Refugee Services and Jesuit Refugee Services.

In 1990, Jesuit Refugee Services discerned a response to the Cambodian situation in which the team developed three distinct groups. One group remained with the refugees in the camps until the final refugees were repatriated; a second group began working outside the situation to advance peace and reconciliation; and the third group formed a new group inside the geographic boundaries of Cambodia. Denise was asked to be part of the third group, and in this way became the first foreign sister in Cambodia after Pol Pot’s time in leadership in Cambodia (1975-1979).

Denise continues to work with Jesuit Services and its Cambodian team Metta Karuna (Mercy and Loving Kindness), that includes a number of Cambodians, some Providence Sisters, and some Jesuit priests from around the world. She coordinates educational, health, and rural development programmes in several provinces, as well as the provision of assistance for people with disabilities.

Cambodia is one of the countries that has been most severely impacted by landmines, and Denise is very involved nationally and internationally in the anti-landmine movement. She and other Jesuit Service staff were part of the network of non-governmental organizations and individuals who led the movement resulting in the 1997 Mine Ban Treaty signed by more than 100 countries. This treaty bans the use, stockpiling, and transfer of landmines. She serves on the coordinating committee of the International Campaign to Ban Landmines and continues to campaign for funding for victim assistance and mine clearance. She and her team in Cambodia have also been highly involved in advocating for the treaty to ban cluster munitions; this treaty becomes an international law in less than two weeks on August 1, 2010.

For more information on Denise’s ministry in Cambodia, see: http://www.opw.catholic.org.au/index.php?option=com_content&view=article&id=641&Itemid=94 and http://www.jrscambodia.org/index.html