Where Sisters of Mercy Minister: Canada (40) Newfoundland is a province of Canada on the country's Atlantic coast in northeastern North America. This easternmost Canadian province comprises two main parts: the island of Newfoundland off the country's eastern coast, and Labrador on the mainland to the northwest of the island. Slightly more than half of the people make their homes in small villages strung along the rocky and rugged coastline. The remainder live in cities and towns, the largest of which is the provincial capital of St. John's. St. John's is the most easterly city of North America.

The GDP in Newfoundland and Labrador was 9.1 per cent in 2007, much higher than the average for the rest of Canada. This is due to mining and oil production, as well as service industries with financial services, health care and public administration being the top three contributors.

History of the Sisters of Mercy in Newfoundland

The story of the Congregation of the Sisters of Mercy of Newfoundland began when Bishop Michael Anthony Fleming traveled to Dublin, Ireland, where he approached Catherine McAuley to request a community of Sisters of Mercy for his island mission. To facilitate his plan, the bishop agreed to send to the convent on Baggot Street a young lady to be trained as a Sister of Mercy so that she could return to Newfoundland and found a Convent of Mercy in St. John’s. The bishop’s choice for this important role was Marianne Creedon, a young Irish woman who had lived in St. John’s since 1833 and who was familiar with the needs of the mission. Catherine McAuley received Marianne Creedon into the novitiate at Baggot Street, and on August 19, 1841, Marianne, now Sister Mary Francis, was professed as a Sister of Mercy. Nine months later, on May 2, 1842, Sister Francis Creedon, accompanied by Sisters Ursula Frayne and Rose Lynch left St. Catherine’s Convent, Baggot Street, and crossed the Atlantic Ocean to form the first community of the Sisters of Mercy in the New World. They arrived in St. John’s, Newfoundland, on June 3, 1842. This date marks the establishment of the Congregation of the Sisters of Mercy of Newfoundland.

During the first eleven months of the new mission, the Sisters of Mercy visited the sick and the poor in their homes. On December 12, 1842, the Sisters moved from their temporary home, the bishop’s residence, to their new convent on Military Road. This was the first Mercy Convent in the New World. On May 1, 1843, Our Lady of Mercy School, Military Road, was formally opened.

Sisters of Mercy in Newfoundland today

Today Sisters of Mercy of Newfoundland make a commitment to alleviate injustice and to continue to reach out in compassion and service to the poor and oppressed, especially to women.

In 2001 the Mercy Centre for Ecology and Justice was established in St. John’s. This office highlights the congregation's commitment ‘to focus our resources and energy towards examining, challenging and healing injustice and oppression’ and ‘to live a spirituality flowing from a sense of the sacredness of creation.’

The centre works to engage sisters, associates and others, especially youth, in its many projects and activities. The centre serves as facilitator, advocate, educator and prophet in the many aspects of ecology and justice.

Mercy Centre for Ecology and Justice

Mercy Centre’s focus from an Ecological perspective is paralleled by another ministry in St. John’s: the Gathering Place, a Centre for Poor and Vulnerable People operated by the Sisters of Mercy and Presentation Sisters. The Gathering Place was founded in 1994. The Gathering Place is a Service Centre committed to building community, promoting equality and providing nourishment for those seeking respite from isolation and loneliness.

One of the partners with Gathering Place is the St. John’s Safer Soil, a local group that promotes gardening and landscaping techniques in areas where lead may be or is a problem. There are ways of gardening safely in such areas, as well as a natural way of removing lead from the soil called phytoremediation. The group has started a Demonstration Garden behind the Gathering Place; the demonstration garden is maintained with help from students at St. Bonaventure’s College and provides vegetables for the Gathering Place. This work links the vulnerable environment with vulnerable persons, allows the opportunity for each to strengthen the other, involves young people in the endeavour and provides research outcomes applicable well beyond the small garden project. 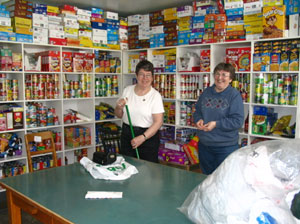 Food Banks and other food programs have evolved in Canada to serve the needs of the poor and those who find themselves in a financial crisis and lacking food. Many of the sisters throughout the province of Newfoundland and Labrador commit themselves on a regular basis to setting up, managing or volunteering their time in food banks.

Sisters also provide for the religious and spiritual care of the sick and aged at home and in hospitals, in personal care homes and nursing homes through pastoral ministry. One sister is physician who provides medical care in a Quebec hospital on the border of Labrador; two other sisters are in ministry as Registered Nurse and Licensed Practical Nurse. Another sister, a former healthcare executive, provides consultation and education within the health care sector on a provincial, national and international level. Additional sisters visit the sick and elderly in their homes and in care facilities, and the congregation administers a long-term care facility for the aged in St. John’s: St. Patrick’s Mercy Home.

Sisters are involved in the prison system as advocates, teachers, and pastoral care-givers. They provide spiritual and social activities to enhance the quality of the lives of the inmates by leading worship and prayer, by teaching sessions on self esteem, self-awareness and personal growth. They advocate for the basic needs of life, food, shelter, clothing for those who are leaving prison and those who are trying to make a new life for themselves. Sometimes sisters accompany persons to the courts and serve as support, advocates and as witnesses.

A small number of Sisters of Mercy are ministering as spiritual directors and spiritual facilitators, working with individuals and groups. Some of their work is in a marriage and family life agency, individual and group spiritual direction, retreats and administration and programming in spirituality centers, marriage tribunal. Some sisters work in the parish setting as catechetical program leaders and educators. Others provide counseling in a formal setting like hospital, mental health program, prison and counseling centre. One sister has gained expertise in massage, Reiki and other alternate treatment modalities.

The sisters have been active in ministry with the Aboriginal People in the Mi'kmaq in Conne River on the island of Newfoundland and the Innu in Sheshatshiu in Labrador. One sister served on a Royal Commission on Renewing and Strengthening Newfoundland and Labrador’s Place in Canada which explored the place of the Aboriginal Peoples within the province and showcased their art.

Two sisters participate in ministry through the Association for New Canadians in St. John’s which is a Non-Profit, Community Based Organization dedicated to the provision of Settlement and Integration Services for Immigrants and Refugees.

The Sisters of Mercy in Newfoundland have also been noted for bringing the gift of music and song into the lives of many. Though not currently employed as music teachers or directors, sisters continue to share their musical talents in the parishes or other facilities where they minister. One sister continues to compose beautiful music for liturgical functions and special events in the Archdiocese of St. John’s. A grand musical legacy continues to endure in the province and elsewhere and has been recognized throughout the world in the voice or musical talent of alumna of the Mercy music teachers.