Where Sisters of Mercy Minister: Ethiopia (46)

Ethiopia in eastern Africa is one of the poorest countries in the world. It ranks 170th out of 177 countries on the 2004 Human Development Index. More than three quarters of its population lives on less than $1 a day. Its poverty-stricken economy is based on agriculture, and this sector suffers from frequent droughts and poor cultivation practices. 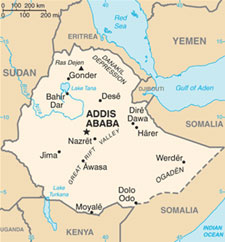 Ethiopia is unique among African countries in that it escaped colonial rule for the vast majority of its history. From ancient times through most of the 20th century, it was ruled by a monarchy. The only years it was under foreign rule were from 1936-1941 when it was occupied by Italian forces. In 1974, a military junta, the Derg, deposed Emperor Haile SELASSIE and established a socialist state. This socialist state faced bloody coups, uprisings, wide-scale drought, and massive refugee problems, and it was toppled in 1991 by a coalition of rebel forces, the Ethiopian People's Revolutionary Democratic Front (EPRDF). A constitution was adopted in 1994, and Ethiopia's first multiparty elections were held in 1995. In the late 1990s, Ethiopia was involved in a border war with Eritrea; a peace treaty was affirmed in December 2000 and an international commission was set up to determine the final demarcation of boundaries. Ethiopia has not agreed to the geographic coordinates determined in November 2007 by the Eritrea-Ethiopia Border Commission.

Sisters of Mercy in Ethiopia 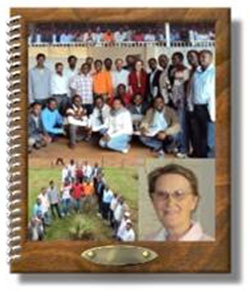 The Sisters of Mercy are present in Ethiopia with the ministry of Sr. Rosario Staunton, a member of the Institute of Our Lady of Mercy, Great Britain. Rosario, pictured in the bottom right of the collage, ministers at Samara University where she has been involved in the development and delivery of education courses. This university was set up in 2005 and it is still an active building site. In a recent e-mail, she said: ‘six thousand students are packed into various spaces on the expanding building site but they take the dust, smells and overflowing sewage pipes as normal.’

Sisters of Mercy beyond Ethiopia impacting the life in Ethiopia

The Western Province of the Congregation of the Sisters of Mercy, Ireland, is involved in a collaborative programme with an Irish organisation Vita, through which the two organisations are trying to alleviate poverty and promote self-sufficiency in Chencha, Ethiopia. Vita’s development approach is “introducing innovation in community based sustainable livelihood development for households, through partnership with communities, local governments and other like-minded organisations.” In the Chencha region of Ethiopia, the collaborative project works to address food insecurity issues by supporting communities to enhance crop and livestock production and generate off-farm income.

The launch of the Vita-Mercy Project took place in 2009. Sr. Elizabeth Manning, Provincial of the Sisters of Mercy, Western Province, speaking on behalf of the Province said she was delighted with this partnership and that it seemed to be a perfect match in terms of ideals and values. ‘Traditionally personnel were sent out to mission fields including the African countries, and while personnel are still the most valued resource, it is a financial resource which allows this kind of project to happen and is the resource that will now work for us when we are no longer able to go to such places. The domestic nature of the project is what appealed to Sisters when it was introduced at the regional meetings, because traditionally we were Sisters who went into peoples’ homes on visitation and tried to give a hand to women in particular, with education, healthcare etc… that is our strength and this is a story that touches our hearts.’