Where Sisters of Mercy Minister: France (28) 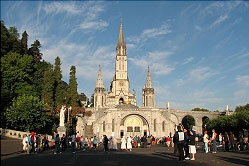 Last weekend on the Feast of the Assumption (Sunday, August 15), approximately 30,000 pilgrims were evacuated from Lourdes, France, after the French police received a phone call saying that four bombs were set to detonate in Lourdes at 3:00 p.m. that afternoon.

The shrines were evacuated peacefully, and after police determined that the area was free of explosives pilgrims returned for a torch-lit procession in the evening.