Where Sisters of Mercy Minister: Guam (39)

Guam is an island in the western Pacific Ocean and is an organized, unincorporated territory of the United States. It is one of five U.S. territories with an established civilian government. The island's economy depends primarily on tourism, U.S. Department of Defense installations, and locally owned businesses. It receives large transfer payments from the U.S. government.

Guam's public school system is modeled on the U.S. system, and education is compulsory for children between 5 to 16 years of age. There are 38 public schools and 22 private or independent schools that are operated by religious organizations (14 Catholic and 8 Protestant), including the schools co-sponsored by the Sisters of Mercy.

Sisters of Mercy in Guam 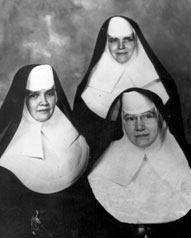 The Sisters of Mercy first came to Guam in November 1946 when Mary Inez Underwood, Mary Louise Wiensenforth, and Mary Annette McBennett arrived from Belmont, North Carolina (USA). The first group of postulants entered the Sisters of Mercy in December of that year.

The early ministries of the Sisters of Mercy in Guam were in the provision of Catholic education. In September 1949, the Academy of Our Lady of Guam and Cathedral Grade School were established in the capital city of Hagatña; and in 1950, Santa Barbara Catholic School opened in Dededo. In 1952, the Sisters established the Infant of Prague Nursery in Tai; and in the l960s Saint Anthony School was opened in Tamuning.

Photo: Foundresses of the Sisters of Mercy in Guam 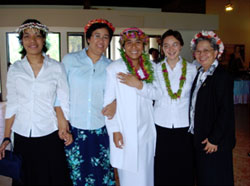 Today there are 31 Sisters of Mercy living in Guam, all of whom belong to the Institute of the Sisters of Mercy of the Americas, South Central Community. They co-sponsor four Catholic schools in Guam (Academy of Our Lady of Guam, Bishop Baumgartner Memorial School, Saint Anthony Catholic School, and Santa Barbara Catholic School) and two nurseries and kindergartens (Infant of Prague Nursery and Kindergarten and Mercy Heights Nursery and Kindergarten).

Many of the Sisters of Mercy serve in these nurseries and schools as care givers, teachers, administrators, and librarians. Other Sisters of Mercy are involved in pastoral ministry with the visitation of the sick and as the diocesan administrator of Pastoral Ministry for the Archdiocese of Agaña. One serves in the area of spirituality as the director of Our Lady of Kamalin House of Prayer.

Mercy Action Marianas, Ltd., or MAML, was established in 2002 to ensure the continuance of the ministries of the Sisters of Mercy in the Region of Guam. MAML exists to support the works of Mercy that will foster human dignity, help finance the education of students seeking a Catholic education, and provide for the quality of life of the aging and infirmed Sisters of Mercy. They have conducted fundraisers for the Tuition Assistance Program (T.A.P.) to raise funds for “scholarships.” Grants were awarded to students in Mercy-administered schools in Guam and Saramen Chuuk Academy on the nearby island of Chuuk (part of the Federated States of Micronesia) where Mercy Sisters have ministered since 1995. 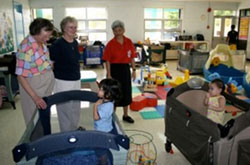 Responding to the needs of working mothers for childcare, the Sisters of Mercy established the Infant of Prague Nursery & Kindergarten, in Tai, Mangilao in l952.

In the early years, enrollment for preschool children, ages three to five, numbered about 50 children. By 1957, the increased need led to accepting infants and toddlers. In 1959, a permanent reinforced concrete structure was in place, only to be damaged by Super typhoon Karen in 1962. After rebuilding and renovating through the ensuing years, the nursery was able to accommodate the increasing need for childcare. As the facility grew in enrollment and size, the quality of education and care increased through the implementation of curriculum and modern, updated methods of teaching.

The Sisters of Mercy established Mercy Heights Nursery and Kindergarten (MHNK) in the l960s. 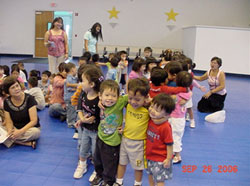 With its steady enrollment increase since 1960, MHNK launched an expansion program in 1984 and has provided additional classrooms, offices, kitchen, teachers’ lounge and bathrooms.

For more information on the Sisters of Mercy in Guam, visit http://sistersofmercyguam.org/.