Where Sisters of Mercy Minister: Honduras (42)

The Central American country of Honduras is bordered to the west by Guatemala and El Salvador, to the southeast by Nicaragua, and to the north by the Gulf of Honduras, a large inlet of the Caribbean Sea. Once part of Spain's empire (during which time it was known as Spanish Honduras), it became an independent nation in 1821. 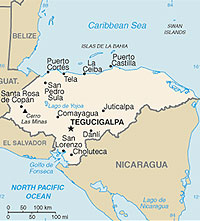 Honduras is the second poorest country in Central America and third poorest country in the western hemisphere (according to the World Bank). It has extraordinarily unequal distribution of income, as well as high unemployment and underemployment. It is estimated that there are more than 1.2 million people who are unemployed, with the rate of unemployment standing at 27.9%. The economy relies heavily on a narrow range of exports, notably apparel, bananas, and coffee, making it vulnerable to natural disasters and shifts in commodity prices; however, investments in the maquila and non-traditional export sectors are slowly diversifying the economy. Nearly half of Honduras's economic activity is directly tied to the US, with exports to the US equivalent to 30% of GDP.

The country was devastated by Hurricane Mitch in 1998, which killed about 5,600 people and caused between $2-3 billion in damage. Former Honduran President Carlos Roberto Flores claimed that fifty years of progress in the country was reversed by Hurricane Mitch as an estimated 70–80% of the transportation infrastructure was obliterated, including nearly all bridges and secondary roads. More recently in 2008, Honduran floods were severe and around half the country's roads were again damaged or destroyed.

Sisters of Mercy in Honduras

In 1959, Sisters of Mercy from Providence Rhode Island (USA) and Belize (Central America) established the first foundation in Honduras, located in La Ceiba. Today there are six Sisters of Mercy who live and minister in Honduras, all of whom belong to the Institute of the Sisters of Mercy of the Americas, CCASA Community (Caribbean, Central American and South American Community). Their sponsored ministries include Casa Corazón de la Misericordia (a home for children with HIV/AIDS), Instituto Maria Regina (a secondary school), and Misericordia Tejedoras de Suenos (a women’s development initiative). In addition to ministry through these organizations, the Sisters of Mercy in Honduras minister in a parish setting as catechists in the mountains above Puerto Cortes. 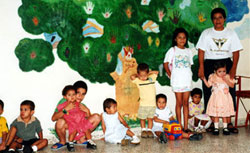 Casa Corazón is a residential community of children and youth living with HIV/AIDS. It was opened on 8 December 1995 by two Honduran Sisters of Mercy (Masbely DelCid and Sandra Hernandez) in response to the urgent need to care for the increasing number of children with HIV who were orphaned or abandoned due to the death of a parent(s) from an AIDS-related illness. The Casa seeks
(a) to assure for each child the necessary conditions to optimize the quality of life by providing the basic necessities (physical, psychological, sociological, and spiritual);
(b) to create a milieu in which the human rights of each child are respected; and
(c) to accompany each child in an integral process of development whether through dying or in improved health.

Originally built to care for 10 children, the Casa ‘family’ has grown significantly and now there are 30 boys and girls who call it their home. It is located in a small colonia named Perfecto Vasquez outside of the city of San Pedro Sula. 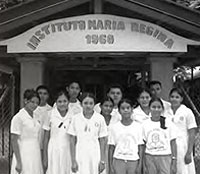 Instituto Maria Regina is a secondary school located in La Ceiba. This school was one of the early ministries established by the Sisters of Mercy upon their arrival in Honduras in 1959. The other early ministries of a kindergarten and a school of professional nursing are no longer in operation.

Misericordia Tejedoras de Suenos is located in San Pedro Sula. It seeks to help women fulfill their dreams. Everyday life for the Honduran poor is hard, and is often full of violence as well as poverty, such that many women do not even know how to dream in that they cannot imagine other possibilities. The goal of Misericordia Tejedoras de Suenos is to help women know that they have the right to happiness and to encourage them to dream into being another reality.

Additional Mercy involvement beyond those living in Honduras

Honduras experienced a coup d'état on 28 June 2009. This coup culminated in a transfer of power from the president to the head of Congress. Countries all over the world condemned the action and refused to recognize the new government. The Institute of the Sisters of Mercy of the Americas, through the leadership of the Institute Justice Team, has been supporting our Honduran Sisters of Mercy in protesting the coup and advocating for peaceful return of Honduras’ constitutional rights.

At the beginning of the political crisis, the sisters in the Caribbean, Central America and South America Community (CCASA) invited all to join in a Day of Solidarity with our sisters, associates and the people of Honduras (July 8th). In August, the Institute Justice Team (IJT) organized a religious delegation with the support of Quixote Center/Quest for Peace. This delegation that included several Sisters of Mercy and the director of the Institute Justice Team visited Honduras 18 - 25 August 2009. Their report details horrific human rights violations and the polarization in Honduran society. To read testimonials they heard during their time in Honduras, see: http://www.sistersofmercy.org/images/stories/MembersNews/2009_pictures/testimonies.pdf; to read the delegation’s report, visit: http://www.sistersofmercy.org/index2.php?option=com_content&task=view&id=2360&pop=1&page=0&Itemid=202.

In early November, the IJT joined with the Quixote Center to co-host the visit to Washington D.C. for leaders of the Honduran human rights organization COFADEH (Committee of Relatives of Missing Prisoners in Honduras), arranging meetings with officials in President Obama’s administration.

The IJT set up a system on the Institute of the Sisters of Mercy of the Americas website for people to communicate with U.S. government officials regarding the situation in Honduras. In the resulting e-mails and letters people advocated for stronger attention to the crisis, particularly regarding the excessive force and brutal human rights violations directed against those protesting the coup. Over 2,500 letters were sent in 2009 through the website mechanism alone. Letters continue in 2010; see: http://capwiz.com/sistersofmercy/home/.

In June of this year, the blood sister of a Honduran Sister of Mercy was kidnapped. This young woman is the mother of three young children. The IJT engaged the U.S. Embassy in pressing for an investigation, and Mercy associates in Honduras circulated a request for letters to Honduran officials. Prayers for this woman’s safe return are requested, as are prayers for all of the Honduran ‘disappeared’.

Photo: Voices of Prophetic Hope, an ecumenical service held in Honduras during the struggle.

To read updated reports on the political and human rights situation in Honduras, visit: http://quixote.org/honduras.