This week, Jamaica continues to be in the news with a state of emergency after a four-day assault between Jamaican soldiers and armed followers of a notorious drug lord. This violence left 73 civilians and 3 security forces dead, and 54 injured. The armed conflict in Tivoli Gardens in West Kingston began on Sunday, May 23, 2010. Most of the 980 detained persons have been released, and security forces continue to occupy the neighborhood in search of the drug lord.

The Sisters of Mercy have a long history of ministry in Jamaica including its capitol in Kingston. The ministry began with a Jamaican woman of mixed heritage (French, Portuguese, and African)—Jessie Ripoll. Jessie used her money and contributions from friends to purchase 43 acres on which she could establish ministries with the poor of Jamaica. Two other Jamaican women joined her in her endeavors, and they opened an orphanage named ‘Alpha’ in May 1880.

A decade after the opening of the orphanage, the numbers of children increased such that the women needed some additional assistance. They invited the Sisters of Mercy from Bermondsey, England, to come to Jamaica to join them in their works of mercy. Four Sisters of Mercy arrived in December 1890, and a few months later Jessie and her two companions were received into the order.

Today, 20 Sisters of Mercy and two candidates belonging to the Institute of Sisters of Mercy of the Americas, CCASA Community (Caribbean, Central America, and South America Community) live and minister throughout the southern portion of Jamaica. The original site in Kingston of Alpha is a large complex that includes Infant, Primary, and Preparatory schools, Convent of Mercy Girls Academy, Alpha Boys School, a boarding school, and a Business College, in addition to convent facilities and Christ the King Chapel.

Alpha Boys Home is for boys ages 6 to 18 years. Most of the boys are from other schools that could not provide the structure needed to deal effectively with the boys’ disciplinary and truancy issues; some of the boys were deemed by their prior schools to be ‘slow learners’. Alpha Boys School teaches the older teens a trade such as print press printing and bookbinding, woodworking, tailoring, and band-making. It is most noted for its outstanding musical tradition and the contributions it and its alumni have made to reggae, jazz, and ska music. For more information on Alpha Boys Home and Boys School, visit:
http://alphahome0.tripod.com/abs/id1.html
http://www.alphaoldboysassociation.com/history.html
http://www.dcsoundclash.com/sisig.html

One of the Sisters of Mercy associated with the music tradition of the school for over 60 years, Mary Ignatius Davies, died in 2003. Tributes to her are still found on multiple websites including:
http://blogs.myspace.com/index.cfm?fuseaction=blog.view&friendId=145134239&blogId=331217191
http://www.alphaboysschool.com/iggy.htm 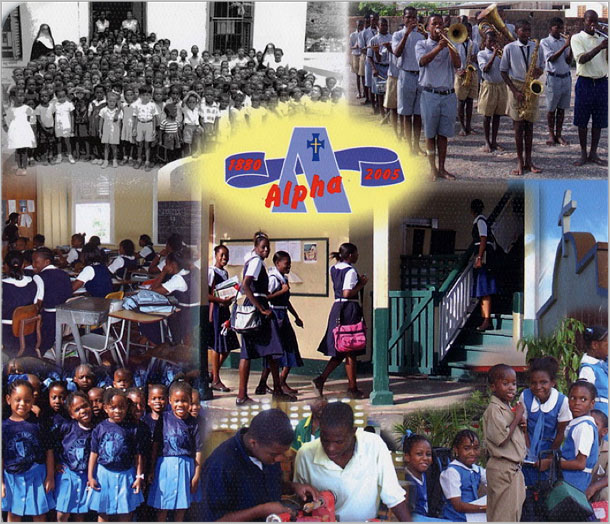 The Jessie Ripoll Primary School for children ages 6 to 12 opened in 1979 as an extension of Alpha Primary School (it was originally called Alpha Primary II and renamed for the 100th anniversary of the ministry at Alpha in 1980). It presently has 850 students. See http://jessieripollprimary.com/.

Two additional ministries of the Sisters of Mercy in Jamaica include the Laws Street Trade Training Centre in Kingston, and St. John Bosco Children’s Home in Hatfield (outside of Mandeville). The Laws Street Trade Training Centre trains economically disadvantaged adults in various skills including sewing, bakery, crafts, garments, home economics. St. John Bosco Children’s Home cares for 150 boys aged 6 to 16 who are orphaned, abandoned, or placed there by the courts. In addition to providing a home and school, the older teen boys are trained in skills with their on-site butcher school, catering school, and building training school. The Children’s Home raises their own chicken and pigs, and 40% of the income needed to run the home is generated through their trade training schools.

The Sisters of Mercy in Jamaica ask for your prayers as their country continues to heal in the aftermath of the recent violence and as the state of emergency situation prevails.