Where Sisters of Mercy Minister: Pakistan (44)

The first four sisters from Australia to arrive in Pakistan were Elizabeth Cloonan, Irie Duane, Lexie Brooks and Jean Walton. They went to Gujrat, in the Diocese of Rawalpindi, on January 22, 1985. Later they were joined by Cheryl Camp, Monique Nyland, Maureen Sexton and Brenda Moss. The mission in Gujrat was expressed through the sisters’ ministries in health care, education, community development and administration of a hostel for young women. 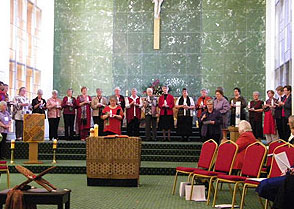 The Institute of Australia celebrated 25 years in Pakistan in a Eucharistic liturgy held in September 2010. On the altar are the sisters who have served in Pakistan.

The following year, Win McManus, Abina Looney, Colleen Livermore and Francis Mary Gillies were missioned to Peshawar, also in the Diocese of Rawalpindi. And over the next 15 years, there were others – Flo O’Sullivan, Gaye Lennon, Elizabeth O’Connell, Jean Walton, Patrice Orchard, Carmel McCormick. In 1995 Mary O’Toole (Congregation Ireland) moved from her prior location in Multan to join these Australian Sisters in Peshawar. Their ministries included school education, establishing and conducting a women’s centre for literacy and other living skills, family services and prison and hospital visitation.

From time to time, the sisters in Pakistan gathered to reflect on their experiences of ministry and community and it was at one of these gatherings that they identified three emerging issues for ongoing attention. These were: the possibility of beginning a formation programme for Pakistani women interested in Mercy religious life; the need for appropriate governance to enhance the mission; and the desirability of developing a comprehensive teacher education programme for the country.

This last eventually became the highly respected Notre Dame Institute of Education (NDIE). Established in Karachi in 1991, it was, and continues to be, a cooperative venture of the Sisters of Mercy and the Catholic Bishops’ Conference of Pakistan. Arguably, in its 19 years, NDIE, whose students come from all over Pakistan to study for a Bachelor of Education or Master of Education, and are of several different faiths, has been an influential means of contributing to real self-determination of some of the poorest people in Pakistan. Among the fruits of the sisters’ work is that many present staff members of NDIE are in fact its graduates – some of whom have already assumed leadership roles in the college.

The sisters who have been central to NDIE since its inception are its three directors, Gabrielle Jennings (RIP), Annette Schneider and Margaret Madden, as well as those who lectured and assisted with administration - Bernadette Marks and Catharine Ahern, both of whom were Deputy Directors of NDIE, Carmel Carroll, Jan Geason, Cynthia Griffin, Cathy Solano and Ann Thomson. Over the years too, a number of sisters have spent shorter periods in Karachi in supportive capacities – Patricia Fitzgibbon, Loyola Crowe, Anne O’Regan and Carmel Martin.

Another fruit of the work of NDIE and the presence of our sisters there is the support of several small learning centres for children. Known as busti schools, these are in the most deprived areas of Karachi.

In 1994, Win McManus began the Mercy mission in Rawalpindi. In 1995 Win was joined by Eileen Ann Daffy who was appointed principal of St Mary’s Academy in Lalazar. She was assisted by Elizabeth O’Connell who took on responsibility for the primary section of the school, and Carmel McCormick. Mary Lewis later came onto the staff as a teacher-mentor. In 2000, Gaye Lennon moved to Rawalpindi to be principal of St Joseph’s school. Audette Mansour also spent a brief period in Rawalpindi in 2006 discerning a possible longer term placement.

Regarding the possibility of commencing a formation programme, on December 12, 1998, this actually was realised when Gulnaz Alfred joined the enquiry stage, with Patrice Orchard as Formation Director. A second enquirer, Anila Isaac, joined the programme in 2001. Gulnaz was professed in 2003 and Anila in 2004. Gulnaz eventually returned to her family in 2008. Anila lives and ministers in Melbourne. 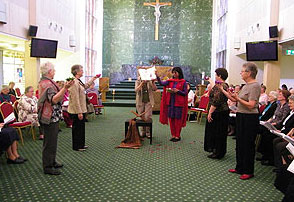 Anila Isaac rsm (pictured in red), native of Pakistan and presently living in Melbourne, has translated the Suscipe into Urdu. This translation was prayed by the congregation gathered to celebrate 25 years of Australian Mercy mission in Pakistan.

For a few years the formation programme was quite active with several enquirers however, as the Mercy presence in Pakistan became more tenuous, it closed in 2007. In addition to Patrice, Kathy Ryan, Kaye Evans and Beverley Whitton all held responsibility for formation at different times.

Two years ago, the Institute Plenary Council of the Sisters of Mercy of Australia made a decision to begin withdrawal from Pakistan. Two Sisters of Mercy remain in Karachi, ministering at the Notre Dame Institute of Education: Margaret Madden and Ann Thompson. Sisters of Mercy worldwide continue to pray for the people of Pakistan, recognising the trauma they are experiencing as a result of the dreadful floods and continued civil unrest.