Where Sisters of Mercy Minister: Panama (15)

Sisters of Mercy have been ministering in Panama for over 50 years as twelve sisters from Brooklyn, New York, responded to the invitation of the Vincentian Fathers to join them in their ministry. Each of the original twelve sisters committed to living and ministering in Panama for a period of five years. Today, seven Sisters of Mercy live and minister in Panama. One is a sister who arrived from Brooklyn, New York, in 1964, and the other six are originally from Panama. 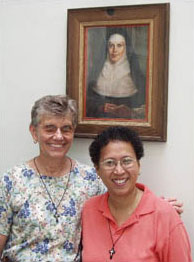 The initial ministry of the Sisters of Mercy in Panama was to teach at St. Mary’s School in the Canal Zone, and they soon expanded to pastoral ministry with women and children in the mountain regions of Panama. From early years on, the sisters have tried to ‘walk with the people’ and learn the culture from them as well as the problems the people face. They have been involved in education, pastoral ministry, care of patients in a leprosy hospital, and formation of leaders of small based Christian communities. In the late 1970s to early 1980s, they also worked with poor Nicaraguan refugees who came to Panama fleeing tyranny under Samoza’s government; this humanitarian and consciousness-raising work among the poor got some labeled as ‘communists.’

Barbara Ozelski, on the left-hand side, is from Brooklyn NY and has been in Panama since 1964; Dina Altamiranda, on the right-hand side, is the president of Sisters of Mercy of the Americas, CCASA Community

A house of formation and novitiate opened on 12 December 1980, and today the sisters in Panama belong to Sisters of Mercy of the Americas, CCASA Community (Caribbean, Central America, and South America Community), and the Community President for CCASA is Panamanian.

Present ministries of the Sisters of Mercy in Panama include MUCEC (Mujeres Colonenses en Camino, or ‘Women of Colon Walking Together’). This ministry, which began in 1985, helps some of the poorest of Colon’s impoverished inhabitants—abused women and children who have little or no income. MUCEC aims to teach self-confidence and useful skills and to instill belief and hope that a better quality of life is possible for even the least fortunate. For further information on this ministry, visit: http://mucec.org/english/nosotros.html. 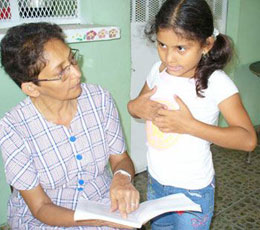 Mercedes Gðmez with a child

Two Sisters of Mercy work in a mountainous area of Chiriqui (Soloy region) where they travel by foot or by horseback in order to reach the people with whom they serve. Their ministry “Seeds of Hope” is a collaborative ministry with the Vincentian Fathers. Ninety seven percent of the people in this area of the country live in severe poverty, and 60% suffer from malnutrition. On 8 May 2008, the mission team of Sisters of Mercy and Vincentian Fathers accompanied the indigenous peoples and campesinos in a non-violent demonstration expressing their concern over the destruction of the river on which they depend for all of their water needs. This river is threatened by the construction of huge hydroelectric plants which generate electricity sent to faraway places such as Las Vegas, Nevada, USA. A You Tube video of this demonstration and the government’s response can be found at: http://www.youtube.com/watch?v=dK1Q4hYee44.

In addition to these ministries, one Sister of Mercy teaches at the Universidad S. Maria La Antiqua, and the Sisters of Mercy have associates, aspirants, and others collaborating with them in their ministries. To read more reflections on the ministry of these sisters in Panama, see:
http://sistersofmercywestmidwest.wordpress.com/2009/07/13/reflections-on-visit-to-panama/ and http://www.panoramacatolico.com/senderos/200907/misericordia.htm.