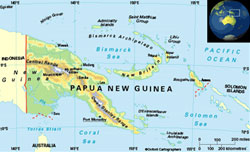 The population of Papua New Guinea (PNG) is approximately six and a half million people, but it is one of the most diverse countries on Earth. It has an estimated 860 indigenous languages and at least as many traditional societies. It has three official languages: are English, Tok Pisin, and Motu.

Papua New Guinea is also one of the most rural countries in existence with 82% of the population living in rural areas. The majority practice subsistence-based agriculture, and about 40% of the country’s 6.4 million inhabitants live on less than $1 a day. Access to basic education and healthcare is poor, resulting in low life expectancy and literacy rates, and excessively high maternal and infant mortality rates. This is especially so in rural and isolated areas.

The Sisters of Mercy in Papua New Guinea 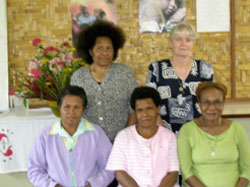 Traditionally the sisters have been involved in responding to the needs of the people of PNG through education, health and pastoral ministry.

To mark the Golden Jubilee of the presence of the Sisters of Mercy in PNG, a project was proposed that would look at the needs of the people of PNG and see what responses the Sisters of Mercy might be able to make. Mercy Works Inc. (the development agency of the Institute of Sisters of Mercy of Australia) conducted a feasibility study which asked the people what they believed are the critical issues facing PNG. The results of the study named the following issues: Unemployment, Poverty, Displacement within communities, HIV/AIDS, Domestic Violence, and Social and related issues.

To combat some of these serious development issues, the Sisters of Mercy of PNG, in partnership with Mercy Works Inc., launched a major new community development project in 2006. Known as Mercy Works PNG, the project is empowering young women, men and their families in the Eastern and Western Highlands Provinces to address the increasing problems of unemployment, domestic violence, and HIV/AIDS.

The Mercy Education Programme in Wewak provides young women who are disadvantaged in some way with opportunities to complete their secondary education. The young women make bilums (hand-woven string bags) to sell so they can help fund their education.

The Women’s Development Centre in St Gerard’s Parish, Kiunga, organises literacy programmes, and skill development classes including the areas of cooking and sewing, and is organising a childcare centre. 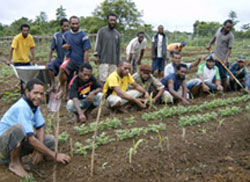 Mercy Works Inc. is supporting an innovative project which is helping unskilled and unemployed young men at risk of joining PNG’s notorious ‘raskol’ gangs to gain farming skills and employment.

Photo: Some of the young men working in one of the Emmaus Farm gardens

The Emmaus Farm, located on 72 acres near Kiunga, is home to 20 young men at any one time, and is steadily being developed. Phase one involved the development of farm infrastructure, such as building a road, fences, houses and a bakery, installing irrigation systems, and planting fruit trees, vegetable gardens and forest trees. The farm is now moving into its second phase: growing chickens, ducks and fish. Not only will the young men learn vital skills, but by producing an ongoing supply of meat and eggs the farm will have protein-rich food for its own consumption and to sell to the local community.

Throughout PNG, maternal and child death rates are excessively high, but they are even higher in remote and rural areas like the North Fly District. To help reduce these disturbing health trends, Mercy Works Inc. is supporting a resourceful and grassroots ‘safe motherhood’ training programme of birth attendants in remote villages.

There are more than 8,000 West Papuan refugees living in Papua New Guinea’s Western Province, near the border of West Papua, many for more than 30 years. Most of these refugees live in the remote North Fly District, either in the official refugee site at East Awin, in villages and settlements along the border, or in Kiunga town.

Maureen Sexton rsm, a Sister of Mercy of the Melbourne Congregation, has been supporting refugees in this area since 2003, and she was joined by Catherine (Cathy) Corbett rsm of the North Sydney Congregation in 2004.

The status of West Papuan refugees in PNG varies and is a complex matter. People who came prior to PNG’s independence in 1975 have assimilated and are recognised as PNG citizens. But refugees who came across in the 1980s, 1990s and between 2002 and 2004, fall into two groups: those who have relocated to the East Awin refugee site (about 2,700), and those who have chosen to remain on the border (between 5,000 and 6,000). Refugees at the East Awin site have ‘permissive residency,’ which means they have official refugee status and some privileges. The latter group, referred to by the government as ‘traditional border crossers,’ had all services removed by the PNG Government and the UN’s Refugee Agency, the UNHCR in 1987. 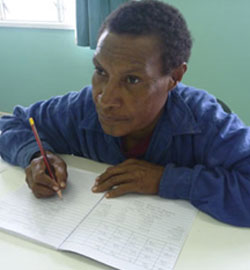 Maureen and Catherine’s main work is supporting these border refugees. Maureen works in the Diocese of Daru-Kiunga’s Social Programme for Refugees which provides education, health care, and advocacy support for refugees living in Kiunga and the border settlements on the Fly River. Catherine is a member of the St Gerard’s Pastoral Team which includes eight border villages in its boundaries. She is the Parish Women’s Animator working closely with the Women’s Co-ordinator and the many women’s groups. This year the women have started a pidgin literacy course.

Photo: Anna is one of the women participating in the literacy course

Mercy Works Inc. supported the work of the Social Programme for Refugees in three ways. It has contributed toward the construction of a new building at Kiunga which serves the dual purpose of providing a gathering space for development and support activities among refugees, as well as an office location for staff of the programme. Support is also provided to refugee students at primary and high school levels, encouraging them to stay in the school system for as long as they are academically achieving. Priority is given to young women and those students whose parents are subsistence farmers and from remote areas. The community library at the East Awin refugee site has also been strengthened through the purchase of much needed books and resources.

Mercy Works Inc. is supporting two new projects in the North Fly District of Papua New Guinea that focus on the needs of women and families. A group of women from St John’s Parish, Matkomnai have wanted to run a literacy programme for women in their local language, Aekyom, since the late 1990s. The Matkonmai literacy project will be driven by, and for, local women. In this pilot phase, two women from each village will conduct classes twice a week in 11 villages of the parish.

Meanwhile, the Diocese of Daru-Kiunga’s Family Life Service is commencing a programme for men and women which focuses on promoting ‘right relations’ in the family. The programme will provide opportunities for men and women to come together and talk about issues affecting the family and learn positive communication skills. This preventative programme aims to combat the very high rates of domestic violence in PNG.

Further information on Mercy works projects in Papua New Guinea can be obtained from Mercyworks website at http://www.mercyworks.org.au/.