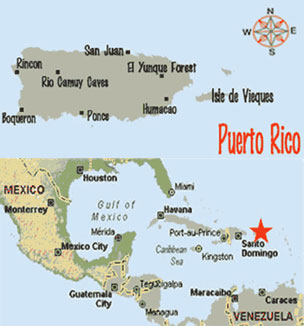 Puerto Rico is a small island in the Caribbean Sea. It was colonized by Spain for over 400 years, and then ceded to the United States in 1898 in the Spanish-American War. While Puerto Rico remains a territory of the United States, Puerto Ricans were granted citizenship status in 1917 and have a means of internal self governance through constitutions that were enacted in 1952.

The Circle of Mercy embraces Puerto Rico since 1941 when the Capuchin priests invited the Sisters of Mercy to staff Academia Católica in Old San Juan. 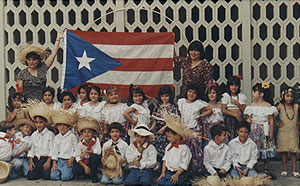 The Sisters transformed the curriculum, established several student organizations and started a two year secretarial program which became very well known and respected for the excellence and efficiency of their graduates’ performance at government agencies and private businesses. The spiritual formation the students received from the Sisters inspired close to a dozen individuals to enter religious life in different communities.

The very poor were also part of the Sisters’ apostolate as they visited families and taught catechism to children in a very poor slum area called La Perla in the Old City. Besides teaching catechism the sisters also set up a system of scholarships to enable a number of children from this area to attend the Academia. To this day, the school’s alumni association continues granting scholarships to children whose parents cannot afford a private Catholic school in the area.Today, of course, they are assigned to other schools since in 1964 Academia closed due to irreparable damage in the physical structure of the building. But, before the Sisters left Old San Juan, Cardinal Aponte Martínez, then Archbishop of San Juan, asked the Sisters to staff Colegio La Merced in Hato Rey. One can truthfully say that the educational system at this school was radically transformed. We have often meet graduates who express it just that way. Many of them have become leaders not only in their professional fields, but are also actively involved in parish work. By 1971, the sisters were recalled to Pittsburgh and only two native sisters remained behind. 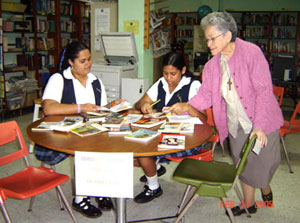 The year 1971 marked a new era of Mercy presence on the island. For the next thirty-nine years Sisters Ana María Cases and Ana Rosa de la Cruz have worked in the schools in the Archdiocese of San Juan.

Ana María taught English as a second language and elementary school science for sixteen years at Academia Santa Mónica staffed by the Sisters of Saint Joseph from Brentwood. Later, she became a guidance counselor. 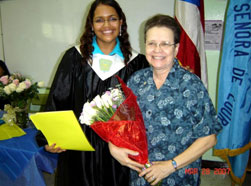 Ana Rosa taught French and was curriculum coordinator for ten years at Colegio Puertorriqueño de Niñas and was appointed vice-principal for the next two years. In 1985 she went to work with the Millvale Franciscans at Colegio San Antonio as high-school vice-principal and became elementary school principal the next two years. Ana María joined her as elementary school guidance counselor there for one year.

Twenty three years ago we were invited to join the staff at Colegio Nuestra Señora de Lourdes at the invitation of Mary Ann Carrillo, the principal. It is one of 10 archdiocesan schools in San Juan. The Sisters Adorers of the Precious Blood from Ruma, Illinois, had formerly staffed this elementary school. At the time, our main concern was to get the pre-school and high school levels accredited by the Dept. of Education of Puerto Rico and as soon as possible prepare the school for Middle States accreditation. We also had to get the school ready for its first high school graduating class.

Besides being the high school Guidance Counselor, Ana María also took on the role of registrar at that level. She was responsible for the establishment of all student organizations: honor and service. Ana Rosa, as vice principal, was in charge of curriculum and staff development, the implementation of the academic program, and also Dean of Discipline.

Significantly enough our school’s philosophy was summed up in three words which we feel go hand in hand with the spirit of the Sisters of Mercy: 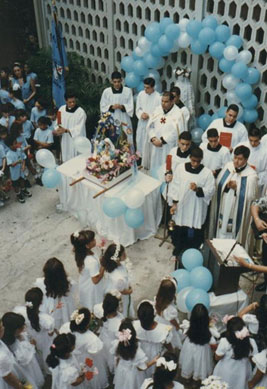 In our personal lives as well as in the training of our teachers, student program, and activities, we tried to stress love towards those we serve, love for the Church and the institution we work for. Love for the institution is very much related to our commitment to service. We tried to build a community in which all members are willing to do whatever is necessary, at any time, or place in order to enrich, support, and help the educational community.

Photo: Students celebrating the Feast of Our Lady of Mercy

Through our religious curriculum, liturgical celebrations, and many other activities we tried to build up a praying school community. We had student organizations dedicated to apostolic works.

One of these, the Mercy Volunteers, was responsible for praying for vocations, spreading devotion to the Divine Mercy, and to our Lady of Mercy. But all the students’ organizations contributed to all the activities whenever we had school-wide drives such as for clothing, canned foods, and personal hygienic supplies. We had an ongoing fundraising campaign and together with the proceeds from Ana Maria’s mission store, the school was able to contribute to the clean water project in Cimbote, Perú as well as to several other organizations, especially “Las Duchas” in Old San Juan which provides help for over 900 homeless persons. These duchas are shower facilities. 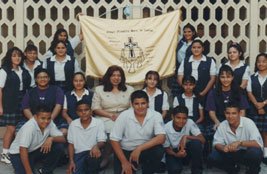 We are very grateful to the Pittsburgh Regional Mercy Fund for having awarded a total of $16,000 to this project in the past several years. These monies were used towards the purchase of new clothing, medicines such as antibiotics, and some nutritional snacks to eat while they are visiting. Some volunteer doctors and nurses regularly visit the project and help fix their wounds as many are AIDS patients. Groups of college students often become involved in this work…some coming even from stateside universities.

As we retire from full time work at Colegio Nuestra Señora de Lourdes, we perceive our mission in Puerto Rico as Catherine McAuley said in one of her letters...........

“a resolve to do good today, but better tomorrow...taking one day at a time...taking short careful steps…and great strides”.

Both of us are grateful for the trust and confidence that our community has placed on us, making us feel responsible for maintaining the tradition of Catherine McAuley and the group of seven pioneer sisters. And, paraphrasing Angela Bolster...

“keeping in mind that our mission is above all to give witness of our consecration to Christ in order to attract others to love and serve Him”.