Where Sisters of Mercy Minister: Samoa (36)

The island nation of Samoa is located about half way between Hawaii and New Zealand. Formerly known as Western Samoa, it consists of two large islands, Savai'i and Upolo, and several small islets.

The Samoan people are predominantly Polynesian and comprise the second largest Polynesian population in the world, after the New Zealand Ma'ori. Samoa’s primary industry is agriculture, and much of the Samoan economy is dependent upon remittances from overseas relatives and international development assistance. Overall, literacy rates are high, but employment opportunities are limited for many Samoans. The Samoan government describes a “poverty of opportunity” which exists for many.

In 1972 Sisters of Mercy from Auckland (Aotearoa New Zealand) established a house in Leulumoega, Somoa, on the north coast of the Upolo island near Apia, the capitol. Somao’s Cardinal Pio asked them to staff the new secondary school, Paul VI College, built on land gifted by the Pope. Today, approximately 150 boys and girls attend Paul VI, and Sisters of Mercy continue to teach in and administer the school. 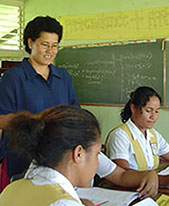 Sisters of Mercy also teach in the local primary school: St Joan of Arc Primary and Pre-school, Leulumoega. In addition, they have established a clinic and an early childhood centre. From 1982 – 1990, the novitiate was based in Leulumoega.

In 2003, another community was founded in Fusi, on the island of Savai'i, to staff St Theresa’s primary school and early childhood centre.

Over the years Sisters from throughout Aotearoa New Zealand have served alongside indigenous Sisters in mission to Samoa and elsewhere in the Pacific.