Where Sisters of Mercy Minister: Sudan (43)

Sudan is a northern African country whose northeast borders the Red Sea. It is the largest African country, and is geographically diverse with mountain ranges dividing the deserts of the north from the swamps and rain forests of the south. 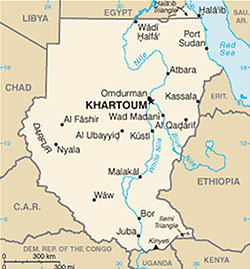 Sudan has been at war with itself for most of its post-colonial history, which began in 1956 with its independence from the UK. One and a half million people have been killed in two rounds of north-south civil war; and the separate ongoing conflict in the western region of Darfur has claimed the lives of 200,000 – 400,000 people and displaced two million.

The country is currently preparing for a 9 January 2011 referendum which could divide the country into two independent states. The initiative whereby southern Sudan may gain its independence was set in motion by a 2005 peace agreement ending one of Africa’s worst civil wars. International observers fear a renewed outbreak of violence during and after the vote.

Sisters of Mercy in Sudan 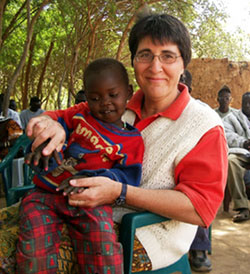 Photo: Cathy Solano (pictured with Daniella), former Education Co-ordinator for the Diocese of El Obeid in central Sudan in the Nuba Mountains.

Maureen, Cathy, and Kathleen’s ministries have been focused around education. Maureen is the education coordinator for the Diocese of Rumbek, and Cathy held a similar position for the Diocese of El Obeid. Kathleen has been teaching at St. Bakhita’s Elementary School in Narus.

Finding appropriate facilities and staffing for schools in Sudan is a challenge. In many parts of Sudan, children learn under trees, sitting on stones; the few new or renovated pre-war buildings in use are due in a large part to the Church and a few Non-Governmental Organizations. There are virtually no qualified teachers available, and the adults who are willing to try to teach seldom have an education beyond the primary level themselves.

Beyond her time teaching at St. Bakhita’s Elementary School, Kathleen created a project to improve the lives of women and children of the area. She discovered that children routinely endure and die from preventable diseases of tapeworm and dysentery, so began teaching hygiene classes to prevent these diseases.

Kathleen has maintained a blog during her time in Sudan; to read her blog click here. Cathy wrote a few articles about her time ministering in Sudan and reflecting on the need to be courageous and to work with a broken heart. To read those articles, click here.

Sisters of Mercy beyond Sudan impacting the situation in Sudan 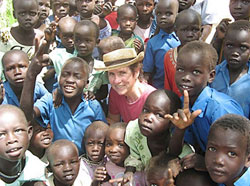 Marilyn Lacey rsm is a Sister of Mercy of the Americas (West Midwest Community). In 2008 she co-founded and became the executive director of Mercy Beyond Borders, a not-for-profit organization incorporated in the United States that assists women and children in southern Sudan. It uses three strategies to alleviate poverty: education of women and girls, the provision of seed capital to women for micro-enterprises, and the promotion of maternal and child health.

Photo: Marilyn Lacey is surrounded by some of the children she met on her trips to Sudan.

The vision for Mercy Beyond Borders began fermenting after Marilyn’s visit to southern Sudan in 1992, during which time she was profoundly impacted by the extreme poverty, devastation, and starvation that she observed. Some of the micro-enterprise grants to women that Mercy Beyond Borders has funded include seed money to cultivate vegetables, to purchase bicycles so that women in seven different villages do not have to walk four hours to sell their vegetables at the market, and to open roadside cafes to sell tea and bread to travellers. In addition, Mercy Beyond Borders also provides scholarships for girls to attend elementary and secondary school.

Marilyn is presently in Sudan visiting some of the funded and proposed projects. To follow her blog, click here. In addition to travelling to Sudan to provide oversight to some of the projects and explore additional needs, Marilyn also travels to Mercy colleges, universities, and high schools to educate people on what is happening in Sudan and outlining how they can help. Through these and other public lectures and through the Mercy Beyond Borders website (www.mercybeyondborders.org), many within the wider Mercy community have been educated on the situation in Sudan and have been mobilized to help alleviate the situation there.

Sisters of Mercy ministering with Sudanese refugees beyond Sudan

Finally, numerous Sisters of Mercy and partners in ministry work with refugees from Sudan in a variety of countries, but especially the United States and Australia. The Sisters of Mercy in Australia have collected some of the stories of the Sudanese refugees in Victoria and New South Wales. To read these stories, click here.