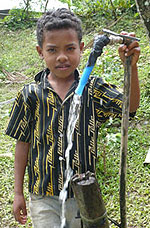 Timor Leste (or East Timor) is the poorest country in the Asia-Pacific Region with a long history of being a colonized nation. For a few centuries, they were ruled by Portugal and occupied by Japan during World War II. Later they were occupied by Indonesia for 24 years during which time over 100,000 people were killed or starved to death. Timor Leste struggled for its independence, which it achieved through a vote for independence on 30 August 1999. A violent rampage followed the vote, and approximately 1,500 people were killed, hundreds of thousands of people were terrorized and displaced, and a scorched-earth campaign destroyed most houses, hospitals, schools, and roads. The country is slowly rebuilding itself, with the progress being delayed by internal conflict and violence. 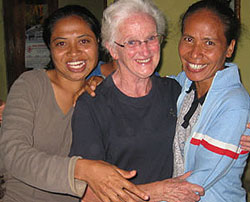 Two Sisters of Mercy, both members of the Institute of Sisters of Mercy of Australia, live and minister in Timor Leste. Maryanne Dwyer rsm ministers in Aileu, a three-hour drive south of Timor Leste’s capitol of Dili. She has been in Timor Leste since 2003. Helen Nolen rsm arrived in Timor Leste in 2005 and ministers in Fohorem, a remote community of 4,500 people in the country’s southwest. Mercy Works Inc., a ministry of the Institute of Australia to support local and overseas relief and development activities, is involved in health, education, and community development projects in both locations.

Photo: Maryanne Dwyer rsm, pictured with two women from Aileu, has lived in Timor Leste since 2003. 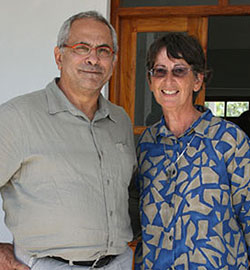 Mercy Works Inc. assisted a basic Christian community in Aileu build a centre for women. In this centre, women are able to participate in formal literacy, numeracy, sewing and craft classes, and they also have space for them to share their cultural and spiritual heritage and learn about cooking and medicinal practices. Another Mercy ministry in Aileu is the establishment of youth groups in 26 villages of the parish. These groups offer support to the youth and a range of activities such as sports, music, educational and discussion forums, and personal and spiritual development sessions.

The remote village of Fohorem has no general electricity supply, no telephone coverage, and a deplorable road system that isolates people from the rest of the country and makes it practically impossible to buy and sell goods outside the district. Up until 2008, and the effort of community development initiatives led by Helen Nolen rsm and funded in part by Mercy Works Inc., the village also had no clean water supply. With the installation of a permanent and safe drinking water system, the health and living conditions of the people of the village are making significant positive improvements.

Helen Nolen rsm is a teacher and is involved in teaching, training teachers, and community development initiatives. She has received assistance from Mercy Works Inc. in building a new kindergarten classroom with solar panels to generate electricity and to renovate the destroyed former hospital into a Maternal and Child Health Centre that is working to reduce the excessively high maternal and infant death rates. 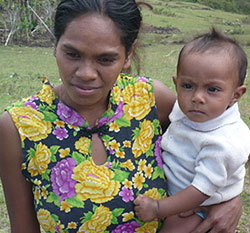 She has started a women’s group that seeks to develop the skills and work opportunities for young women, and she offers support to women who were victimized by the extreme violence inflicted during Indonesia’s occupation of Timor Leste.

For more information on the ministry of the Mercy community in Timor Leste, visit the project profile on Mercy International Association’s website, and Mercy Works Inc. programme profile.

Photo: Mercy Works is committed to reducing the health risks for women and their babies in Fohorem.