In the past nine weeks, the United States government and BP have had many failed attempts to plug the gushing oil well in the aftermath of an oil rig explosion in the Gulf of Mexico on April 20, which killed eleven people. In addition to these attempts, more recent efforts have been to siphon the oil and gas as it flows to the surface; this effort has been less successful than desired because of the quantity of oil gushing from the well.

They are now left with the slowest but surest solution of drilling a relief well a mile down. This ongoing crisis is the biggest environmental disaster in the history of the United States. A website that can help people visualize the magnitude of the oil spill is: http://www.ifitwasmyhome.com/. In this website, you can put the name of your town in the box that says location (be sure to put the state and country name as well) and the web site will then overlay the Gulf Oil Spill over your local area. You may be surprised at how big it is.

Sisters of Mercy in the United States address human needs through collaborative efforts in innovative and traditional ways in education, health care, housing, and pastoral and social services. The first Mercy school in the U.S. opened in Pittsburgh in 1844. Since then, Sisters of Mercy have educated hundreds of thousands of students from pre-school to graduate level. Mercy sponsors or co-sponsors at least 13 elementary and early childhood education schools, 34 secondary schools, and 16 colleges and universities in the continental United States. Mercy Elementary Education Network, Mercy Secondary Education Association, Conference for Mercy Higher Education, and Network for Mercy Education fosters collaboration among the schools. In addition, Sisters of Mercy teach in diocesan and parochial schools and in both public and private school systems. Many minister in educational settings beyond the traditional classroom, such as in literacy programs and web-based education programs for adult students. 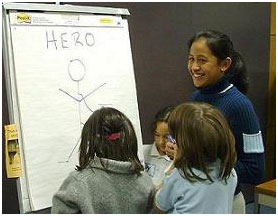 In the area of health care, the Sisters of Mercy sponsor or co-sponsor six health systems and numerous health-related facilities in the United States. These facilities include hospitals, long-term care facilities, rehabilitation centers, family care and outreach centers. Taken together, the Sisters of Mercy are one of the largest health care providers in the country. In addition, vowed members and associates have served in every capacity from scrub nurses, lab technicians, and doctors to CEOs, CFOs, and trustees.

In the 1980s the lack of quality affordable housing hit crisis proportions in the United States, and Sisters of Mercy responded to this need. While some of the housing organizations existed prior to this time, today there are 15 sponsored, co-sponsored, and affiliated housing ministries in the U.S., the largest of which is Mercy Housing Inc. Mercy Housing was founded in 1981 and has developed over 37,200 units of housing nationwide. See: http://www.mercyhousing.org. 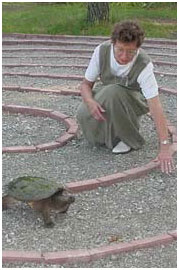 Sisters of Mercy sponsor 13 retreat and spirituality centers in the U.S. and serve as spiritual directors, hospital chaplains, parish associates, religious educators, campus ministers, counselors, writers, and poets. Many vowed members are engaged in prayer ministry on a full-time basis. There are also 43 social service organizations that are sponsored, co-sponsored, or affiliated with the Sisters of Mercy in the United States. In addition, many in the Mercy family can be found in women’s centers, prison ministry, GED training, skills training, micro-enterprises, and food banks or as licensed social workers, psychologists, and counselors in additions treatment centers.

For some members of the Mercy community, justice is their full-time ministry; all others are engaged in justice ministry to varying degrees. Most of the justice efforts center around five areas at the current time, which are areas defined by the Sisters of Mercy of the Americas as ‘critical concerns’ at their 2005 Chapter: 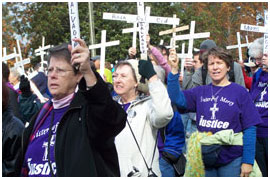