'Heritage is our legacy from the past, what we live with today, and what we pass on to future generations. Our cultural and natural heritage are both irreplaceable sources of life and inspiration.... What makes the concept of World Heritage exceptional is its universal application. World Heritage sites belong to all the peoples of the world, irrespective of the territory on which they are located.'
- UNESCO's definition of World Heritage

In 1987 when the first conversation between Srs Sebastian Cashen (then Superior General of the Dublin Sisters of Mercy) and Mary Trainer (USA) took place about the future of the Mercy Convent on Baggot Street, the mutual desire they named was for this house on Baggot Street to be the source of unity and inspiration for all Sisters of Mercy worldwide. They viewed the house as the heritage and birthright of all within Mercy, and a place that embodied the source of inspiration for Mercy mission and formation of the charism.

After the years of planning, fundraising, and renovating, 64a Lower Baggot Street opened in 1994 as Mercy International Centre - a place of heritage, hospitality, and renewal - the world heritage site for the global Mercy community. While the preservation of the house itself was the first major heritage project unifying Sisters of Mercy worldwide, many more collaborative heritage projects have ensued. This article will not attempt a comprehensive listing of them all, but instead highlight a few.

The Heritage Room, which continues to educate and inspire pilgrims today, opened with the rededication of Baggot Street as Mercy International Centre in 1994. 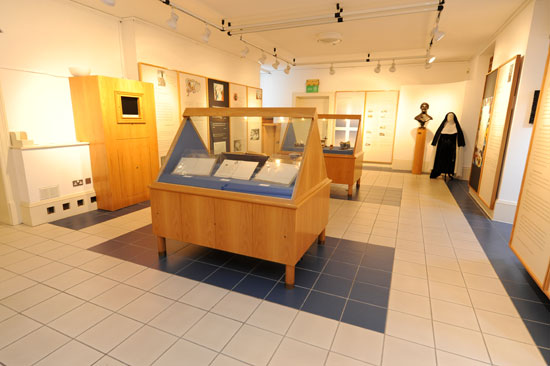 The goals guiding the creation and selection of its displays are:

1. To illuminate the origins and history of the Sisters of Mercy and show the relevance to contemporary society;
2. To highlight the historical context in which Catherine McAuley and the early sisters lived and show who significant societal needs shaped the growth and development of the Institute of Mercy;
3. To make visible the links between Catherine McAuley's experience of suffering and poverty in Dublin and her reaching out to pressing needs in other parts of Ireland, England, and Newfoundland;
4. To identify the social conditions which precipitated Mercy movement into diverse ministries, addressing human misery in all its forms;
5. To reveal the diverse lands, peoples, and cultures where Mercy foundations took root;
6. To present artefacts and art of the early sisters as a wellspring of education and inspiration;
7. To display the illuminated manuscripts - e.g., the Rule and Constitutions with illuminations that reveal both the human impulse to describe and understand the life and spirit of the Institute of Mercy and the desire to create things of beauty.

Map of the Spread of the Sisters of Mercy Worldwide:

The International Room at Baggot Street is home to an electronic map depicting the countries and territories where Sisters of Mercy live and minister. It shows the expansion of Mercy in three waves: 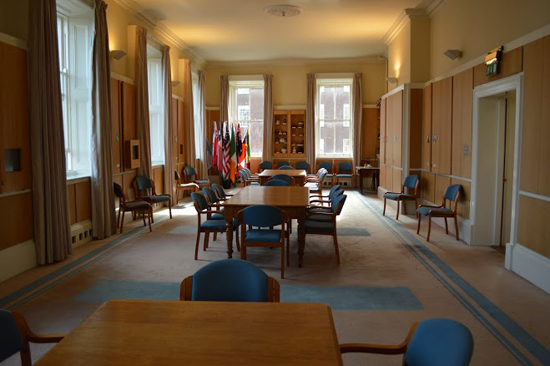 International Room looking towards Baggot Street. Electronic map is on the wall behind the viewer. Far left corner are the flags of the 40+ countries where sisters of Mercy live and minister. To the right are the cupboards containing the posters prepared 20 years ago for the opening of MIC. See details below.

As audio portion of the display describes the expansion, small red lights appear in the various cities where Sisters of Mercy live and minister. By the end of the three-minute display, lights illuminate multiple locations in 44 countries and territories, and the viewer hears 'Catherine' say:

Ah, my dear sisters, friends, associates in Mercy - all part of our Mercy family - thanks be to God for every one of you! Not only do you hear the cries of the poor in Dublin, but your hearts are attuned to the cries of suffering throughout the world. It seems so overwhelming, but I know it is the same mysterious Providence that gave rise to our Institute that enables you to reach out and touch the misery of your times. The God of Mercy is still with us, and I your proud mother am still cheering, 'Hurrah for foundations!

In addition to this electronic display, the mercyworld.org website tells the story of the spread of Mercy throughout the world. This interactive map allows users to click on a country's name and read a short synopsis of the ministry that takes place in that location.

Data is collected from each Mercy congregation annually to have an accurate number of sisters living and ministering in each country. The most updated information (December 2013 data) is available here.

For the past twenty years, the International Room at Baggot Street has also been the home of over 150 poster board displays that depict the global mission of Mercy as it was being lived out in 1994 in the diverse cultures and countries where Sisters of Mercy ministered in that year. Each congregation that existed in 1993 was invited to submit one poster per congregation, national project, regional community, and overseas mission. These displays were then grouped by country or continent and displayed in custom-made cabinets with an artistic mandala depicting the country or continent.

Plans for updating the telling of the stories of the Mercy ministries are underway, and funding has been received from Dignity Health (USA) and The Ireland Funds. Just this past week, the 1994 poster boards were taken down from the walls and professionally photographed for future digital viewing, and those participating in the 20th Anniversary Celebrations in Dublin in September 2014 will see the newly created displays.

A major undertaking by Mercy archivists around the world was the creation of the International Register. This electronic register of membership from 1831 to today provides basic information of every sister who made first vows as a Sister of Mercy from Catherine's day until today. Information included (if available) for each person is: baptismal name; religious name (and former religious name, if applicable); parents' names; native place; convent of entry; congregational membership; dates of birth, entrance, first profession, death (or, in some cases, departure); and any notable information (e.g., founding party to a new country, or first congregational leader of a newly established Institute or Union). This International Register seeks to honour the life of every woman who has ever professed vows as a Sister of Mercy by holding her record at the birthplace of Mercy. It currently has 55,145 records.

The records of three Sisters of Mercy are shown below. These are of Catherine McAuley and the first two Sisters to profess vows with Catherine: Anna Maria Doyle and Elizabeth Harley.

Bibliography of Mercy Books and Articles:

The Mercy International Research Commission comprised of Mercy historians, researchers and archivists undertook the task of creating a Bibliography of Mercy Books and Articles. This bibliography lists published books and articles written by or about the Sisters of Mercy throughout the world since the founding of the congregation in 1831. It focuses specifically on published historical and theological works and generally does not include works in the humanities, physical sciences, or social sciences. The bibliography was created in 2005, and updated in 2007. It is available online on the mercyworld.org website

Catherine McAuley's office at Baggot Street - the location where she wrote many of her letters - now houses the writings about her and her descendents.

The Catherine McAuley Library at Baggot Street has three collections:

The 1,225 books held in this library are listed electronically  Donations of books missing from this collection are always appreciated! Over 500 books listed on the Mercy Bibliography are missing from the collection, and there are likely more books by Mercy sisters and associates that did not fit the criteria of the Mercy Bibliography that are also missing. Donations can be sent to:
Mercy International Centre, Library,
64a Lower Baggot Street,
Dublin 2, Ireland. 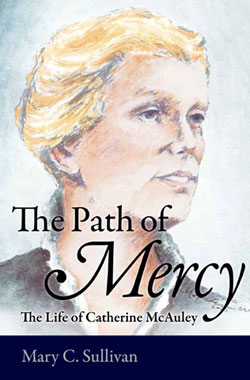 In May 2006, Mary C Sullivan rsm (USA) was commissioned by Mercy International Association to write a biography of Catherine McAuley. The resultant book, The Path of Mercy: The Life of Catherine McAuley, was published simultaneously by The Catholic University of America Press (Washington DC) and Four Courts Press (Dublin) in 2012. This is the first full-length documented narrative of Catherine McAuley in over fifty years, and it utilises extensive primary sources.

International Meetings of Archivists and of Researchers:

Archivists from around the Mercy world told the stories of their country/regional foundresses during the Second Archivists Conference (2003). As part of MIC's 10th Anniversary Celebrations, these stories were published by Ethel Bignell rsm, MIA Administrator, in a 146-page book, Beyond Catherine: Stories of Mercy Foundresses. The stories have since been made available online

The third International Archivist Conference (2009) brought together 53 archivists and heritage personnel and their leadership liaisons from nine countries. Presentations were on archives and heritage displays, oral archives, archival indices and thesauruses, Catherine's cause for canonisation, and the canonical rights and responsibilities of archivists. These presentations are available online

Twenty six researchers were invited to participate in the Mercy International Research Conference (2007). This conference, entitled ‘Fire Cast on the Earth—Kindling’: Being Mercy in the Twenty-First Century had the scholars both (a) engage in a theological reflection process on 'mercy for the sake of mission' and (b) model a process that could be used around the globe to facilitate such reflection. The papers presented at the conference were published in a book by the same name as the conference, and are also available online with the accompanying presentations. A group of scholars is currently exploring the feasibility of holding a second Mercy International Research Conference in 2015.

Mercy International Association holds precious resources in our archival collection, including original artwork by Clare Augustine Moore, original letters written by and to Catherine McAuley, hand lettered Rule and Constitutions by Cecilia Marmion, and other manuscripts and letters by early Mercy women surrounding Catherine. In an effort to preserve and protect these resources, and to make these treasures more accessible throughout the Mercy world, MIA began the process in 2012 of digitizing archival resources.

The digital images being created and catalogued by Mercy International will serve three purposes:

1. the preservation of an image of each of these treasures in the unlikely and tragic event that a catastrophe occurs and resources are destroyed;
2. the creation of an online resource for historians and researchers, which makes the archive more readily accessible and assists in the long term preservation of the original documents;
3. the provision of a wider range of options for how to share these treasures with the Mercy world and beyond.

More information on the digitisation project can be found here 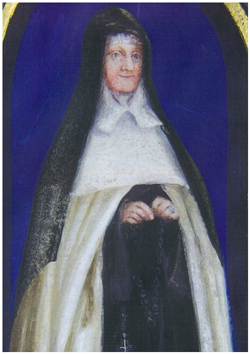 One of the unexpected gifts of the digitisation project has been the uncovering of an original image of Catherine McAuley, created by Clare Augustine Moore. The illustration, which was discovered by Mercy Associate Danielle Hicks-Gallagher, appears in the artwork of Clare Augustine Moore’s manuscript The Rule and Constitution of the Religious Sisters of Mercy, on the page entitled ‘Of the Superior and of the Visitation of the Monastery’. For the complete story of this 'illuminating discovery', see the article by Danielle posted online.

Mercy International Association is grateful for all of the archivists, historians, researchers, heritage centre personnel, creative writers, graphic designers, and others who have protected, preserved, and told the Mercy story in such a way that it is an inspiration for present and future Mercy mission. The story of Mercy is a story worth telling, and it will continue to be a source of life and inspiration for generations to follow.

On iOS devices we recommend the Puffin Browser app which will allow you to view Flash-based content (the slideshow/ image gallery) on your iPad, iPhone and iPod.